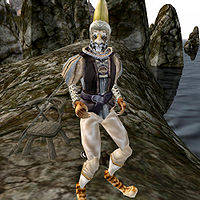 M'Aiq the Liar is a Khajiit rogue who can be found on a small island southeast of Dagon Fel in the Sheogorad Region. Much of M'Aiq's dialogue refers to many requested or anticipated features of Morrowind which were not included in the final release of the game.

The first time you initiate a conversation with M'Aiq, you can only partake in persuasion and ask him about Solstheim. Subsequent conversations enable you to explore all of his other topics of unique dialogue.