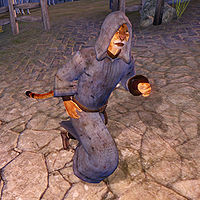 M'aiq the Liar is a Khajiit savant who gives you opinions about the game. All of his comments are arguably serious responses to various issues in the game; however, the majority are dismissing people who point out issues in the game as stupid, unlike his earlier appearance in Morrowind where most of his statements were lies or farcical comments that did not quite address the topic in the way you would have expected.

He starts the game just outside of Anvil and thereafter runs back and forth between Leyawiin and Anvil. Sometimes when you leave Leyawiin or Anvil he will be standing at the entrance or near the stables. At noon, no matter where he is, he stops and looks for calipers for about 5 hours unless he has already collected at least 20 of them. He cannot be killed because he is an Essential Character, but he's not related to any quests.

M'aiq wears a tattered robe along with the rare tattered hood and a pair of oiled linen shoes. He also carries an iron dagger should he need to defend himself.

His only topic of conversation is rumors. He will give you a different rumor each time you meet him, but he only discusses that one during the encounter. After every chat, M'aiq will run away from you along the road, usually much faster than you can run (his Speed and Athletics are 100). When he runs, he follows the road south for a while, and then reaches the shore. There, he zigzags along near the beach and always ends up at the Strid River. At that point, he crosses into Valenwood, and you, obviously, cannot follow him further.

M'aiq's phrases were included to make fun of the things that forum members complained about on the official forums, and as partial rebuttals to those comments. Below are the phrases that he says in game, along with their likely meanings.

This is what he says as a greeting when you enter conversation with him.

"M'aiq longs for a Colovian Fur Helm. Practical, yet stylish. M'aiq is very sad he does not have one."

A reference to the Colovian Fur Helm that M'aiq wore in Morrowind, and the first piece of armor found by many in that game (on Tarhiel's corpse). Logically, a Colovian helm should have been available in Oblivion, as the entirety of Colovia is accessible. Furthermore, the Colovian Fur Helm is not part of a full set of Colovian Fur Armor; there is no such thing - perhaps a sign of why it was left out of Oblivion.

"M'aiq wishes he had a stick made out of fishies to give to you. Sadly, he does not."

This is a reference to the Fishy Stick meme on the official forums.

"M'aiq believes the children are our future. But he doesn't want them ruining all of our fun."

A reference to discussion on the forums during development about whether children should be included in Oblivion. One group wanted children to be in to add realism; the other group argued that if children were added then you would be allowed to kill them and the game would be denounced as a child murder simulator. A counter to this would be to make the children invincible, but the opposition countered this saying that doing that would ruin any initial realism. This was brought up in the next installment of The Elder Scrolls, where children wander, all of them impossible to kill without mods.

An answer to complaints that the beast races looked better in Morrowind, and to people who do not like the "beast races."

"Some people wish to throw their weapons. That seems foolish to M'aiq. If you hold your weapon, you only need one."

Referring to the lack of throwing knives, darts, and stars in Oblivion.

"Some people want special bows that take too long to load and need special arrows called bolts. M'aiq thinks they are idiots."

Reference to a heated discussion in the forums that occurred when one of the developers confirmed that neither crossbows nor throwing weapons would be included in the game.

"Feet are for walking. Hands are for hitting. Or shaking. Or waving. Sometimes for clapping."

A reference to various complaints about limits on the range of uses for limbs available to the average adventurer, including the inability to kick.

"M'aiq prefers to adventure alone. Others just get in the way. And they talk, talk, talk."

A reference to the discussion about Oblivion being a multiplayer game, and limits on NPC assistance. Multiplayer is one of M'aiq's recurring topics (another anti-multiplayer easter egg might be the Adoring Fan; all he does is get in the way and talk).

"People always enjoy a good fable. M'aiq has yet to find one, though. Perhaps one day."

Perhaps a reference to how the game Fable was perceived to stack up poorly to its legendary hype. During development, Oblivion was often compared to Fable.

"So much easier to get around these days. Not like the old days. Too much walking. Of course, nothing stops M'aiq from walking when he wants."

"M'aiq is glad he has a compass. Makes it easy to find things. Much better than wandering around like a fool."

Referring to the Quest Compass objectives.

"Why would one want to swing a staff? A mace hurts more. Or a sword. Can't shoot a fireball from a sword, though."

Since staves were a blunt weapon in Morrowind some folks didn't like it when they discovered that they would only be used as "spell launchers" and not melee weapons anymore. This also applies in reverse, where melee weapons could only have 'on strike' enchantments, rather than 'on cast', or even 'constant effect'.

Before the release of Oblivion, the news that mounted combat would not be possible created considerable controversy in the forums, culminating in a petition asking Bethesda to reconsider which included 500+ signatures. Even so, mounted combat was not included in the game. "A perfectly good dinner" is a reference to one of M'aiq's lines from Morrowind, where he states that he likes horses "especially with good cream sauce", which is itself a reference to fan complaints about the lack of horses in Morrowind.

"Levitation is for fools. Why would we want to levitate? Once you are up high, there is nowhere to go but down."

Yet another feature Morrowind had that Oblivion does not is levitation; jumping height was restricted as well. Oblivion's major cities are in separate cells from the world, and the appropriate content (either the inside of cities, or the wilderness outside) is not loaded if you enter a new cell without using the door. An earlier variation of this concept is found in the Morrowind expansion Tribunal, where clipping and a message inform you that jumping over the walls is restricted (although the Mournhold wilderness is not found past the walls in that game).

A debate was armed in the forums about if nudity should be in the game or not like it was in Daggerfall—and in fact, a minor media storm ensued when it was discovered that Oblivion contains hidden nude chest textures for females. M'aiq also commented about this in Morrowind. It may also refer to the appearance of naked Khajiit and Argonians in Morrowind.

"I don't know why one would want to destroy a building. It takes time to make it. Much time."

"I have seen dragons. Perhaps you will see a dragon. I won't say where I saw one. Perhaps I did not."

Dragons are idolized at the forums and many fans hoped they would make regular appearances in Oblivion, but they did not. The Avatar of Akatosh counts as a single sighting, though M'aiq may say this before the Avatar appears. Dragons exist in Elder Scrolls lore, and make prominent appearances in The Elder Scrolls V: Skyrim.

"Werewolves? Where? Wolves? Men that are wolves? Many wolves. Everywhere. Many men. That is enough for M'aiq."

Another widely expected feature was were-creatures since werewolves made a stellar appearance in Morrowind's expansion "Bloodmoon". Because of development time related issues they were not included in Oblivion, or in any of the subsequent downloadable content packs.