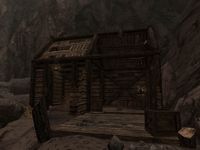 The Ramshackle Trading Post is an old, decrepit trading post south of Kagrumez and west-northwest of Ashfallow Citadel.

* Appears only between midnight and 6am.

As the name suggests, this building is derelict, with the doors and windows missing, part of the roof missing, and large holes in the walls. The building faces down a valley to the sea, with what would have been a wonderful view, while the shack is backed by a cliff. In the northeastern corner of the interior is a round wooden table with a couple overturned chairs and one upright chair, which has obviously been used by someone to sit at the table drinking wine, judging by the empty bottles on the floor and the full bottle of wine on the table. In the northwestern corner is a note pinned by a leveled arrow, which reads, Meet me here at midnight. Outside the shack, against the western wall, is a crate holding an expert-locked East Empire Company strongbox, which contains an East Empire pendant and other loot. In front of the shack are a couple scathecraw plants and a food barrel.