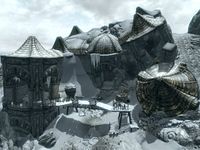 Fahlbtharz is a large Dwarven ruin located east of the Water Stone.

It is inhabited by rieklings settled outside near the entrance and inside along the entry hallway, as well as albino spiders, oil spiders, and Dwarven automatons found deeper down. It contains four interior zones: Fahlbtharz, Fahlbtharz Corridor, Fahlbtharz Boilery, and Fahlbtharz Grand Hall.

You will be ambushed by three rieklings near the entrance, one of which will be mounted on a bristleback. The Dwarven structures reaching outside are partially destroyed and situated on a slope. There are also a few riekling structures—a hut and a bridge leading to a Dwemer tower with a chest and a copy of the rare book Nchunak's Fire and Faith beside it. 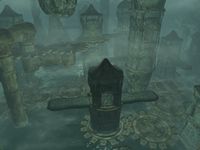 Due to its placement on a hill, the entry hallway is tilted. Go straight up and face a couple of rieklings inhabiting this part. There is a fire behind some fencing with two pieces of charred skeever meat on top and in and beside a tent opposite are three books including a copy of Where were you when the Dragon Broke. The hallway then turns in the opposite direction (downwards) passing another tent and two more huts. Proceed through several broken pipes and piles of rubble until you reach an open door and two dead rieklings pierced with Dwarven arrows. Avoid the two pressure plates that activate the slicer trap just before the door and head inside.

Fight a leveled Dwarven sphere on your way and enter a room with a 10-button control panel on the right and a novice-locked door with a Dwarven chest behind it on the left. The buttons, numbered from left to right, top to bottom, trigger the following: 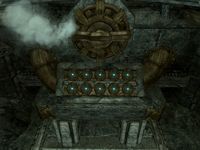 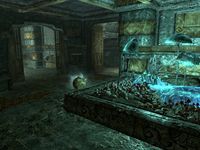 To progress, activate the second button from the right in the bottom row (9). The gate that has now been opened leads to a hallway with a room containing an adept-locked chest on the left. At the end of the hallway is a room containing a kinetic resonator with an expert locked chest on the wall to the left. Hit the resonator to open the nearby gate to the east and make your way through a web-covered part of the dungeon housing several oil spiders and passing several albino spider eggs as well as several different fungi. Eventually you will reach a closed gate which can be opened by hitting the resonator hidden behind the destructible spider web to the left of the gate. Beyond the gate, downstairs, is a room with a mushroom garden containing three White Cap, two Blisterwort, an Imp Stool, a Bleeding Crown, and one Fly Amanita fungi. You will need to deal with two Dwarven spiders and a sphere in the two adjacent rooms. The first room through the doorway beside the mushroom farm is a bedroom containing four stone beds around a central table, with an unlocked Dwemer chest behind it. Access the room with a pile of rubble in its center that has broken another table in half and go through the door at the end of the hall to the left.

You will end up in an expansive chamber full of tall pillars, bearing platforms and walkways at their higher levels, and many giant spinning gears on the lower levels, shortly above a large pool of water. Three Dwarven ballistae will be guarding the higher levels. Jump off on one of the spinning gears from under the small Dwemer tower to your right. Navigate forward through the gears, some of which hide Dwarven spiders, and you will be led to the entrance to Fahlbtharz Corridor. 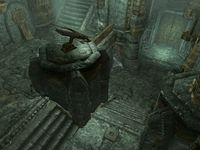 There are two pressure plates near the entrance that trigger a ballista when stepped on. On the way upstairs there is a pressure plate connected to the slicer trap. A single Dwarven sphere will be spawned if you activate any of these three pressure plates. Upstairs to the left is an adept-locked gate, behind which various Dwemer items are stored—seven pieces of smeltable scrap metal, a war axe, and a chest. To the right is a door leading to a higher level of the main chamber, back to the zone Fahlbtharz.

Turn left, go upstairs, and you will find yourself in a room with a valve and a lever. The valve lowers the bridge in front of you leading to the water level of the chamber. Pushing the lever will rotate the nearby tower and draw a bridge to it. Cross the drawn bridge and go straight as far you can, then jump down on the spinning gears. One of the gears has two coin purses and random enchanted shield on the center piece. Cross the gears and jump on the platform ahead. Go upstairs, where you will find the corpse of Eydis, an explorer presumably killed by Dwarven automatons. You can loot her body for a set of Skaal armor (excluding the hat) and her journal. There is a door on the left leading to Fahlbtharz Boilery and a valve in front which lowers two bridges to the water level of the chamber. 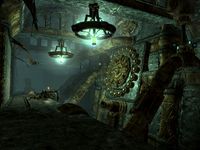 As you enter, you will notice there is an inaccessible gate to your right and a kinetic resonator behind it. Fight a Dwarven spider on your way downstairs to find yourself in a long room full of vent pipes and gears. There will be a shelf with a Dwarven bow and four quivers, each containing 12 Dwarven arrows, ahead of you. A single Dwarven ballista stands guard at the end of the room.

Your progress will be blocked by a closed gate controlled by a steam-powered Dwarven mechanism. Get on the platform above, either by riding the two pistons up at this end or by walking to the far end and climbing the stairs. There is a small alcove underneath the upper platform containing a table and chairs along with four (two on the table, two on the floor) unlocked Dwemer chests. In the center of the upper platform, above the alcove lies a corpse of yet another unlucky explorer, Ulyn, which can be looted for his journal that provides a handful of hints on how to solve the puzzle. Nearby rests a leveled enchanted bow along with a quiver with 25 random arrows (up to ebony) quality. You will also see a boiler consisting of a large Dwemer gear with twenty steam meters around it, and six resonators: three to the left and three to the right of it. Each resonator represents a value (see puzzle values) which equals the number of steam meters that will be powered when that resonator is hit or reset when the resonator is hit again. Steam meters are powered progressively and clock-wise, whereby each steam meter glows blue when powered, and orange when overpowered.

The puzzle is solved when all twenty steam meters are powered, and none overpowered. That can be achieved by shooting the resonators #1, #2, and #5, numbered 1-6 from left to right as you face them. However, if the resonators are hit incorrectly, the boiler will be overcharged, venting out steam and spawning hostile Dwarven automatons. Failing more than two times will result in three moving spinning blades being activated instead.

Go upstairs through the gate that has been opened, and you will find the resonator that opens the previously inaccessible gate between the hallways. Destroy the spider there and open the door straight ahead leading to a higher level of the main chamber, back to the zone Fahlbtharz.

After you exit, an essential lever that is easily overlooked will be on a wall directly to the right. The walkways will then align in a way which, after some further gear-navigating and resonator manipulation, will lead to Fahlbtharz Grand Hall. A skeleton with a random enchanted bow and a quiver containing 15 arrows of leveled quality nearby can be found in the tower with the resonator. The opposite tower holds a large Dwarven chest. To the left of the entrance to the Grand Hall, on top of a tall rock formation, is a skeleton holding a small expert-locked Dwarven chest, as well as an apothecary's satchel (rare) and three lockpicks next to it. 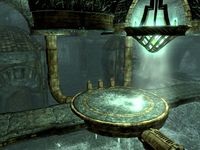 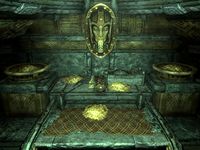 You will find that the entire hall is covered with spider webs, so prepare to fight several albino and oil spiders. Two Dwarven Centurion Guardians can be found sleeping in the corners ahead, but will not awaken, unless attacked or otherwise interacted with. As you move a bit further from the entrance, two Dwarven ballistae will ambush you from above.

Within the hall is a round platform with three Dynamo Actuators that must be filled by Centurion Dynamo Cores, dropped by the Centurions nearby, to progress. Fortunately, the middle actuator is already filled. The actuators, from left to right as you face them, trigger the final gate, the staircase to it, and the poles before the gate, respectively.

After filling the Dynamo Actuators you will be able to access the treasure room, which contains five piles of gold, a treasure chest, a leveled battleaxe up to Daedric quality, a single Kagrumez Resonance Gem, and the unique Dwarven helmet Visage of Mzund. Activate the lever on the left to lift yourself back to surface, directly north of the Abandoned Lodge. This means leaving three valuable centurion dynamo cores behind, the alternative is to take them and make the long trek back to the surface the way you came.

Moving across gears and into towers can be frustrating. A carefully targeted Whirlwind shout can sometimes get you where you want to go. Do a save before trying. 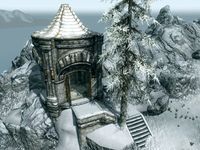