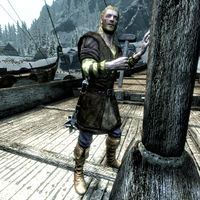 Gjalund Salt-Sage is the Nord captain of the Northern Maiden, and offers passage to Solstheim. Sogrlaf and Lygrleid are his crewmen.

Originally from Riften, Gjalund has been sailing for twenty years. He used to fish off the coasts of Solstheim, but ash from Red Mountain poisoned the waters, so now he ferries supplies and people to and from Raven Rock.

Your first interaction with him will vary depending on whether or not you have met and fought the cultists sent to kill you. If you have not encountered them, he greets you with "If you're looking for passage to Solstheim, you won't find a finer vessel than the Northern Maiden." He will then charge you 250 gold for transport. If you have encountered the cultists, he will instead say, "If you're looking for passage to Solstheim, too bad. I'm not going back there anymore." You then must convince him to take you by bribing, persuading, or intimidating him. Bribing him costs 500 gold, persuading or intimidating him is free.

This Skyrim-related article is a stub. You can help by expanding it.
Retrieved from "https://en.uesp.net/w/index.php?title=Skyrim:Gjalund_Salt-Sage&oldid=2109813"
Last edited on 21 February 2020, at 23:47