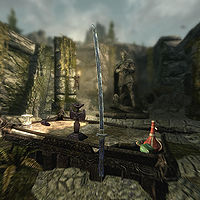 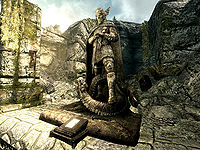 The Statue of Talos where this weapon rests

Bolar's Oathblade is the Akaviri katana of the expired Blade, Acilius Bolar. Its enchantment causes 25 points of stamina damage, as well as twelve points of fear for thirty seconds. Tempering this weapon requires one quicksilver ingot as well as the Arcane Blacksmith perk, with the improvements being doubled if you have the Steel Smithing perk.

Bolar, being the sole survivor of the fall of Cloud Ruler Temple to the Thalmor, retreated to a shrine of Talos hidden inside Bloated Man's Grotto. However, the Thalmor eventually tracked him down to his resting place to continue the systematic eradication of the Blades. Choosing to defend this ancient site and die with honor, Acilius confronted them after leaving behind his last writ and this blade.