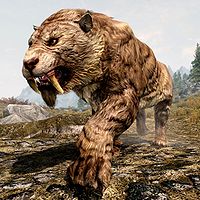 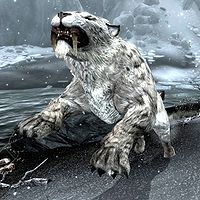 Sabre Cats are large, powerful, and fast felines that, according to Cats of Skyrim, "have evolved two dangerously sharp front teeth". They will attack immediately, and represent a lethal foe. They are found in the wilds of Skyrim. All sabre cats will usually abandon any current prey they are stalking or fighting and direct their voracious appetites toward you. Sabre cats may carry Witbane, a disease which reduces magicka regeneration by 50%. They dislike water, so you can use this to your advantage. As they are naturally stealthy creatures, you may not notice a sabre cat approaching until it's too late.

Snowy sabre cats are white, significantly stronger, and have more health, as well as 50% frost resistance. They predominate at high elevations, and can typically be found in the Pale, Winterhold, and other various snowy places in Skyrim. Two are guaranteed to be found in the mountains northeast of Thalmor Embassy. This is the only fixed location for them in the game.

Vale sabre catsDG are exclusive to the Darkfall Passage and Forgotten Vale, and the light patches on their pelts glow in darkened environments.

With the installation of the Hearthfire add-on, you have the ability to create a sabre cat statue on a large base in the trophy room addition of any homestead, should you choose to build it. The materials needed are: