This article is about the creature. For the item set, see Symphony of Blades (set). 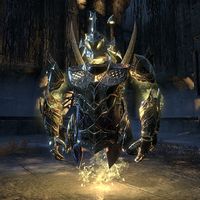 The Symphony of Blades in Depths of Malatar

The Symphony of Blades is the final boss of the Depths of Malatar. It is King Narilmor transformed into an avatar of Meridia's power, in the image of an Auroran suit of armor with four arms and blades. In Veteran mode, burning the Dictates of the Lady of Light will trigger hard mode, where it will now summon colored dark orbs.

During the fight, it can summon the four colors of Aurorans to aid itself, which will converge from each corner of the room to join it in the center and empower it. It will also summon the Auroran Phalanx, a formation of Aurorans that march with Meridia's Light at their side and will empower the Symphony of Blades if they cross paths. 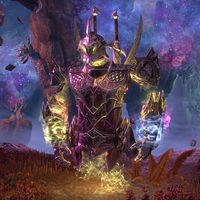 The Symphony of Blades in the Colored Rooms

After reaching around 10% of its health, the Symphony of Blades will transport you to the Colored Rooms, healing itself back up to 25% of its newly increased maximum health. It can also summon the Auroran Phalanx in the realm, spread up into various groups marching in different paths, three Aurorans being in each group.

Afterimage
(?)
Singing Blade
The boss will spin his arms around and around, dealing significant damage to anyone caught in the aoe. It is similar to the big swingy-arms aoe used by the Mournful Aegis enemy found in Hew's Bane.
Cowardice Purification
This ability is probably what happens if you try to exit the arena and run into the barriers of light blocking the two exits.
Decrepify
(?)
Radiant Destruction
This ability is similar to the Templar skill. The boss will shoot a beam of pure light from his hands at the tank. This ability is powered up if a golden Auroran shade reaches him.
Sunburst
When empowered by a red Auroran shade, the boss will send fire aoes spiraling everywhere. You should try to avoid these.
Agonizing Bolts
When empowered by a purple Auroran shade, the boss will call down lightning aoes from the sky that deal more damage if you are hit in succession.
Summon Ice Pillar
When empowered by a blue Auroran shade, the boss will summon ice pillars across the room.
Meridia's Light
An instant-kill attack that accompanies the Auroran Phalanx, being triggered if you run into their barrier. It can only be avoided if at least on Auroran is killed, breaking part of the barrier and allowing the group to pass through.

King Narilmor transforms into the Symphony of Blades when you enter the room.

King Narilmor: "For three thousand years I have protected the Wrathstone! I will not fail her now!"

"Her power is limitless, as are her legions!"
"Aurorans! To me!"
"Warriors of Light! Join me!"

Summoning Aurorans to empower the boss:

"Deliver me her strength!"
"Meridia, lend me your power!"
"By her will, we stand united!"

The boss is empowered by Aurorans:

"Bask in the full spectrum of pain."
"Now you will know despair!"
"I shine in perfect glory!"

Using a fire ability while empowered by the red Auroran:

"Your ashes will be pure, at least."
"Flame is the vengeful weapon of light."
"You will burn in her radiance!"

Using an ice ability when empowered by the blue Auroran:

"There is order in ice. Rigid and pure."
"Water knows how to obey, and blood is its cousin."
"The cold will leech your insolence until you are frozen in eternal supplication."

Using Radiant Oppression while empowered by the gold Auroran:

"The sun warms the righteous, and scorches the worm."
"You will know the sun's fury."
"Her light will strip you of all your failings."

Using a lightning ability while empowered by the purple Auroran:

"Her light will flash from the sky and smite you."
"Her power courses through me!"
"Lightning is the whip she will use to break you!"

"You have yet to taste her power! Gaze into the infinite!"

"Her will, is now your will. Rejoice."
"All must kneel before the Lady of Infinite Energies."
"Supplicants, you will serve for all time."
"The light has seared you clean."

"Kneel before me, and I will make you pure."
"Her will is eternal and her reach endless. Submit."
"You may live to serve, or die a pointless death."
"Your lives are hers, as they have always been."

"There is no escape now. This will be your home or your grave."
"You will be cleansed, do not resist."
"You were blinded by greed, but her light will make you see clearly."
"This is the domain of the Lady of Infinite Energies and I am its guardian."
"However you may try, you cannot resist her."

[verification needed — he says those, but when?]

The Symphony of Blades is defeated
"We will find you. Her reach is boundless!"