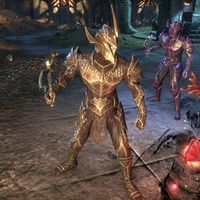 Radiant Aurorans are golden Aurorans fought during the battle with the Dark Orb in the Depths of Malatar, always being the first ones to be summoned. As with the other Aurorans, it will continuously spawn until the Dark Orb is destroyed and will regenerate its health too quickly to be killed during a majority of the battle. Upon being empowered by their corresponding chromatic orb during combat they will gain more health, and destroying the orb prevents the auroran from regenerating health, making it vulnerable to attack. 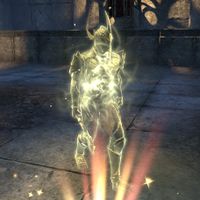 A Radiant Auroran walking to join the Symphony of Blades