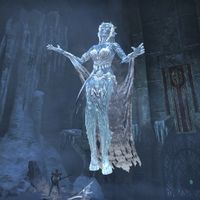 The Weeping Woman is a Nereid that serves as the second boss of the Depths of Malatar. Found in a room in the Ruins of Garlas Malatar, surrounded by the ice statues of Aurorans and other victims, she seeks to take the Wrathstone back from you. She may summon Frost Atronachs awaken the Stone Watchers present in the room to aid her during the fight. An unnatural permafrost blocks the passage out of the room, which will only melt after she has been killed. 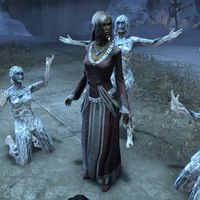 The Weeping Woman before her transformation

Initially, the Weeping Woman is an Ayleid woman, lamenting the sacrifice of her people. She walks to the center of the room and shatters into chunks of ice, returning as a leimenid.

Entering combat
"For her, we kept it hidden from our brethren and buried them with our tears. Here you too will drown."

Idle
"You won't take it. Not after all our sacrifice."
"All their pleas fell on deaf ears. I can still hear their desperation."
"She told us to protect it, no matter the cost."
"We had to keep it from them, no matter how much they needed it."
"We stood by as our empire crumbled, but it remains here. That's all that matters."

In battle
"My tears cling to everything, and drown it in my sorrow."
"There is no choking down this bile!"
"Weep as I do!"
"This is our anguish!"
"Share in our grief, forever."
"Gloom hangs over us all."
"Feel the weight of our loss!"
"A cold heart does not numb this pain!"
"The guiding light burns everyone who reaches too closely."
"Their sacrifice was not in vain."
"Who will weep for you?"

Group wiped
"I have no tears left for you."
"You have paid the price they paid."