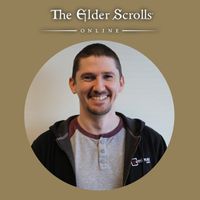 Leamon Tuttle (known to some by the nickname Lemon Turtle[1]) is the lead loremaster for The Elder Scrolls Online. He joined the ESO team at ZeniMax Online Studios on August 31, 2010[2] and was the principal writer on both Clockwork City and Murkmire, working as a senior writer prior to assuming the lead loremaster role in March 2019 following the departure of Lawrence Schick.[3]

Tuttle majored in History and Philosophy in college and initially entered the game development industry with the intention of getting into game art, but instead wound up moving into the writing department. He has occasionally appeared as a guest on episodes of ESO Live and has answered community lore questions as part of the Loremaster's Archive series. Among his favorite characters are Sotha Sil, the Drake of Blades, Paarthurnax, Almalexia, and Daedric Princes.