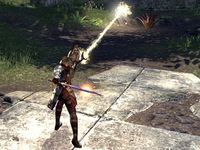 Radiant Destruction deals Magic Damage over time, and deals additional damage to targets with low health. Radiant Glory heals you by a percentage of the damage done, while Radiant Oppression increases the damage based on your current Magicka, up to a maximum of 20% increase.

This Elder Scrolls Online-related article is a stub. You can help by expanding it.
Retrieved from "https://en.uesp.net/w/index.php?title=Online:Radiant_Destruction&oldid=2697482"