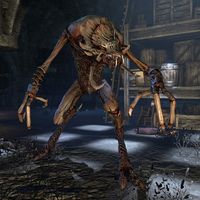 The Scavenging Maw is a large and powerful Hunger that serves as the first boss of the Depths of Malatar. It is encountered in Fort Mistwatch's storeroom, feasting on the purified soldiers.

During combat, it can summon regular hungers called Maulers, or its own shade to strike targets. Periodically it will vanish, and a notice will appear on screen saying that is lurking and waiting to strike.

Hunger Pangs
Deals major physical damage.
Hungry Splinters
Bleeding caused by shattered Hunting Proboscis
Pang Strike
Melee attack, deals physical damage.
Probing Tongue
When the Maw emerges from hiding it will attack the closest player, draining their health with its tongue. This must be interrupted to free them.
Puncture Wound
The boss teleports behind you and strikes you, dealing major physical damage and knocking you down. Should be blocked.
Rake
Caused by shattered Hunting Proboscis. Players hit by this attack will bleed out unless they are healed and protected.
Retch
The Maw spews bile in a cone-shaped radius in front of it, dealing poison damage over time to those who stand in range. It leaves moderately sized poison AoEs on the ground. Should be blocked.
Retched Bile
The round poison AoEs left in the wake of Retch. Deals poison damage over time to those who stand in it.
Slash
The boss deals physical damage with its claws.