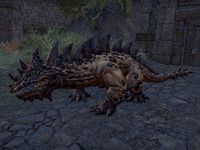 A brown wamasu from the Ruins of Mazzatun

Wamasu are dangerous reptiles native to Black Marsh. They are predominantly found in Black Marsh, but some have been sighted in Upper Craglorn as well as Grahtwood. A single spectral wamasu is summoned during combat by The Storm King in Skyreach Catacombs.

Wamasu lay eggs to reproduce. These eggs emit lightning as the embryo fertilizes and grows. Once the lightning is gone, the egg is ready to hatch.

Wamasu are considered elite creatures, and are thus immune to all forms of crowd control effects.

This Elder Scrolls Online-related article is a stub. You can help by expanding it.
Retrieved from "https://en.uesp.net/w/index.php?title=Online:Wamasu&oldid=2287451"
Last edited on 21 December 2020, at 07:18