Once you've gained access to the Thieves Guild DLC, a young Altmer named Quen will appear in any Outlaws Refuge. This quest can be accepted from the Collections tab, at which stage you will be directed to Quen. Alternatively, she will offer the quest herself if you encounter her naturally.

"Are you here about the job? To forestall any confusion—yes, we split the proceeds equally.
And no, I will not budge on that point."
Job? What job?
"You mean ... you aren't here about the notice?
Well, allow me to explain! I need a partner for a difficult job. It pays well, but it involves travel, and there is some danger. Does that sound like the sort of thing that might interest you?"
Sounds good. I'm in. 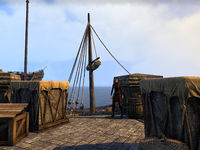 Meet Quen at the docks to travel to Fulstrom Homestead

Go to the harbor in your home alliance which is either Woodhearth, Wayrest, or Windhelm and meet Quen.

"You made it. I wasn't certain you ... well, I'm glad you're here. So, the details!
We're headed to a remote patch of land called Fulstrom Homestead. It's owned by some thane from Eastmarch. He's at war, but his staff and guards remain."
What are we doing there?
"We're looking for a relic called the Giovessen Skull. We slip inside the treasure room, grab our prize, and depart before anyone knows the difference.
After that, we split the proceeds and go our separate ways."
All right. I'm ready to go.
"One more thing ... I'd prefer not to spill any blood, but I leave our safety to your discretion. If a guard sees you, take shelter in a hiding spot.
Sound good?"
Sounds good. 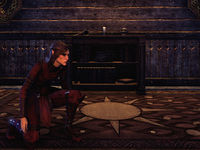 Enter the boat to travel to Fulstrom Homestead. When you arrive on the island, fight your way past the wolves and approach the outer compound stealthily. The majority of the NPCs in this area are just citizens, who will increase your bounty if they see you but are otherwise harmless and can be killed if necessary. Watch out for Manor Guards, who act as any other guard would. They will attack on sight and cannot be killed, and will take your stolen items and bounty if they manage to kill you. The ones in the outer compound carry torches and have their detection radius indicated by a blue circle on the ground. Luckily, they move slowly and there are hiding spots scattered around the area. These special places are marked by a yellow glow and will completely conceal you if you activate one, even if you have been detected.

Make your way towards the portcullis marked on your map. Do not try to swim towards the portcullis, as you will be killed by slaughterfish. The portcullis won't open on your first try, and Quen will climb over to the other side (displaying some remarkable acrobatics) to a winch. Now open the portcullis and enter the inner compound. This area has Manor Guards, more civilians, and NPCs called Pack Masters that accompany wolves in the more remote parts of the grounds. Make your way past these to the secret entrance on the east side of the house. Pick the lock on the entrance and enter Fulstrom Manor. 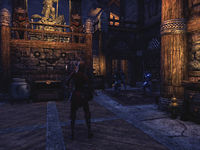 Ambushed! The Iron Wheel was waiting for you and Quen the whole time.

Enter the treasury, locate the Giovessen Skull and take it. At this point you will be confronted by Chief Inspector Rhanbiq, a member of the Iron Wheel, who will order you to return the Skull. You have the option of either placing the Skull back where you found it, or attacking the three Iron Wheel members—Captain Brand, Sahdabeh, and Yumanam—who enter nearby.

If you surrender, you'll find yourself in an open cell in the cellar. If you fight, you will have to find the cellar yourself, behind a bookcase in the small side-room off the Treasury. Talk to Quen in the cellar/catacombs:

"Who was that? What was that all about, with dowries and iron wheels?"
I have no idea. Did you tell anyone we were coming here?
"Nobody! Well ... I sent word to the Thieves Guild of Abah's Landing. They were interested in acquiring the Giovessen Skull.
Abah's Landing was to be our next stop. But why would this "Iron Wheel" set an ambush here? Are you certain you've never heard of them?"
Never. But we can figure out who they are after we escape.
"Of course, you're right. The Iron Wheel could return at any moment. We need to get out of here, and fast.
Wait ... did you hear that?"
Hear what?

A mysterious Argonian named Walks-Softly will approach and will reveal himself to be part of the Thieves Guild. Listen to the conversation between him and Quen and talk to him after that.

"Didn't realize there were two of you. Next time the Iron Wheel springs a trap, I'll bring another uniform."

Who are you? What's going on? / First tell me who are you and what's going on.
"I'm Walks-Softly, and we're currently fleeing the Iron Wheel. We can talk about the details once we've actually fled.
Oh. What are your thoughts on spiders?"

Spiders? What do you mean?
"When I was posing as one of the manor's guards, one of the actual guards mentioned these old catacombs. Said they were "a basket full of spiders."
Unless that's an obscure Nord expression, I'm guessing he meant actual spiders."

You said you were from the Thieves Guild. What is that?
"Nothing we should discuss right here.
But I promise, as soon as we've escaped the Iron Wheel, I'll answer your questions." 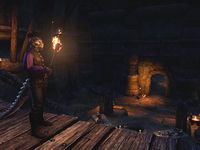 "On the bright side, these only have four limbs."

Continue deeper into the catacombs. The first half of the catacombs contains draugr, some of whom can be snuck past if careful. The final half is filled with spider enemies, including a giant spider called Crypt Dweller Drusilla. Exit the catacombs and speak to Walks-Softly near the boat.

"Could've lived my entire life without running through a spider pit.
But we made it through. you'll make a real impression in Abah's Landing."

What's in Abah's Landing?
"The Thieves Guild. And my guildmaster, who can explain why the Iron Wheel thinks you deserve the same fate they've inflicted upon us.
It's an unpleasant fate. It involves branding irons."

What if I don't want to go to Abah's Landing?
"You are your own master. But the Iron Wheel is relentless, and they know your face. They know your partner's face, too.
So tell me where we're all headed. I suggest Abah's Landing, as soon as you're able."

All right. Take us to Abah's Landing. (travel to Hew's Bane)
Maybe later. For now, we go back where we came from. (return to the port from which you departed)

If you choose to go to Hew's Bane, you will arrive on the docks of Abah's Landing. Talk to Walks-Softly there.

"Always a pleasant journey to Abah's Landing. Head to our Thieves Den—the guildmaster awaits.
Your partner and I will be along when she's less expulsive."
Where is the Thieves Den?
"Hidden within an old cistern that's long forgotten by this city's merchant lords. A new home for us, after the Iron Wheel tore apart the old one.
It's a bit damp. You get used to it."

Now go to the Thieves Den in the western part of town and talk to Zeira to complete the quest. She will offer you formal membership of the Thieves Guild, which will unlock the related skill line and costume as well as several daily quests. You will also be given a random piece of foot armor from the Bahraha's Curse set.

"Walks-Softly sent word of your time at Fulstrom Homestead. Said you slipped out from between the Iron Wheel's greedy fingers."
Yes. You must be the guildmaster.
"I am, but call me Zeira. Titles don't carry weight when you live in a cistern.
Pretty bold of you and Quen to go after the Giovessen Skull. Did you know she sent a letter, asking to set up a meet? Rookie mistake—the Iron Wheel read her mail."
They knew we were coming all along?
"That's why I sent Walks-Softly to pull you out. Don't get me wrong. Quen may be green, but she planned a real heist—the kind we used to pull, before the Iron Wheel captured or killed most of us.
Bastards."
Why is the Iron Wheel after the Thieves Guild?
'You heard of Magnifica Falorah? She's a noble from Taneth with a substantial dowry in her family tomb. We tried to steal it—but we failed, and she hired the Iron Wheel to punish us.
I hear their leader thought you worked for us. Want to make it official?"
What do you mean?
"If the great Chief Inspector Rhanbiq thinks you're part of the guild, who I am to disagree? We need good thieves—capable thieves, like you and Quen—to pull ourselves out of the gutter.
So, care to join the Thieves Guild? We have nowhere to go but up."
I'll join the Thieves Guild.
"Good—you aren't afraid of a challenge. The more you do for us, the more gold and respect you'll earn. Reputation goes a long way with us.
Bringing us the Giovessen Skull is a good start. Here's your cut. Don't worry, Quen will get her portion."