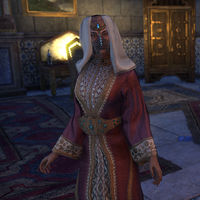 Magnifica Falorah is a Redguard noble from Taneth of the al-Danobia bloodline and the sister-in-law of King Fahara'jad, she is known as the "Jewel of Taneth—beautiful, cold, and hard as diamond".

As the Thieves Guild in Abah's Landing has previously tried to rob her family tomb, she has now hired the Iron Wheel, led by the no-nonsense Chief Inspector Rhanbiq, to deal with the thieves. She has also agreed to marry a powerful local merchant lord Cosh despite her distaste, although at the wedding things do not go as planned.

After the Thieves Guild rescues their own from the Iron Wheel, Magnifica Falorah extends an invitation to Zeira through one of her servants, Malizah, to meet with her at Zeira's earliest convenience. According to Zeira, it involves the Thieves Guild harassing the Merchant Lords of Abah's Landing. 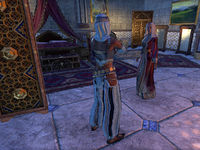 After infiltrating the wedding, you and your fellow guild members wind up in Falorah's bedroom:

Zeira: "Magnifica Falorah, we came to warn you. Cosh is not the man he seems."
Magnifica Falorah: "He's a merchant lord of Abah's Landing. That's one step above the scum they scrape from ship hulls. Is there any other grand revelation before I call the guards?"
Wedding Date: <Suggests She listens to you.>

You can then speak with her and try to convince her.

"People say, "this is not how I imagined my wedding to be." They tell amusing stories of what went wrong, trying to outdo each other's tales.
"Calling the guards on wedding crashers" isn't one I've heard. Why shouldn't it be the story I tell?"
"Cosh" is an alias. You are about to marry the man who stole your dowry.
"The Thieves Guild stole my dowry. In doing so, they upset my standing in Taneth.
But far worse, they desecrated the remains of my ancestor, Danobia. When they couldn't remove the jeweled crown from her head, they separated it from her body."
Your future husband did that. He framed the Thieves Guild.
"The merchant lords of Abah's Landing are exceptionally crooked. They buy from pirates who raid Taneth waters and bandits who raid Taneth roads.
But plundering ancestral tombs? That is too far, even for them."
He used your dowry to become a merchant lord. Before that, he led the Thieves Guild.
"Cosh, head of the Thieves Guild? You say he betrayed his own people to steal a dowry, for some mad plot to marry a noble of Taneth?
If you are bards sent by my cousin, your imaginations are sorely lacking. Why not say Cosh rode a dragon?"
He's not Cosh. His name is Nicolas, and we can prove he was behind the tomb robbery.
"With what time? My escort arrives soon to begin the wedding. I have accepted my fate, as you must accept yours.
Unless you can produce the skull of Danobia herself, you can tell your fanciful stories to the Iron Wheel."

She will get thoroughly bored of this:

If you try and talk to her afterwards, she will just advise you to surrender.

"There is nowhere to go. Surrender peacefully and I will have Chief Inspector Rhanbiq treat you with mercy.
Or not. I have a wedding to attend."

Chief Inspector Rhanbiq will begin to officiate the ceremony once you and your date arrive.

Chief Inspector Rhanbiq: "Today, Lord Cosh of Abah's Landing joins with Magnifica Falorah, the Jewel of Taneth."
'It is my honor, as a duly appointed officer of the Iron Wheel, to officiate their union."

Zeira will then rush in to stop the ceremony.

You encounter Magnifica Falorah in Chief Inspector Rhanbiq's office in the prison:

"I have no quarrel with you. My dowry is safely returned to al-Danobia Tomb, as are the remains of my ancestor. Those responsible are in custody.
Yet I am not entirely satisfied with the outcome."
Nor am I.
"My former fiance Cosh … that is, Nicolas … has been very cooperative with the Iron. He claims he was duped, that stealing my dowry was Zeira's plan all along.
Zeira has said nothing."
What do you think?
"Zeira's price to surrender was the safety of those she brought along to the wedding. You, and your strange little friend. Almost … honorable, in her own way.
Nicolas lies—I know that now. But Chief Inspector Rhanbiq has no evidence to the contrary."
I have evidence. I'll trade it for Zeira's freedom.
"The town criers in Taneth already proclaim her trial. Politics as they are, I cannot simply release her.
But I can tell you where she is. And I can offer a lucrative proposal to your entire organization—to her directly, once you free her."
Deal. Here, read this journal. It will prove Nicolas' guilt.
"Good. Zeira is held in the prisons beneath us, but you must hurry. Chief Inspector Rhanbiq plans to move her—to where, I do not know.
I'll escort you to the prison door. If you stay by my side, the Iron Wheel shall cause you no harm. Are you ready?"
I'm ready.

She will then walk along the bridge and down the stairs to the Prison entrance.

Once at the door she will command the current guard.

Magnifica Falorah: "You there! Unlock the door and allow my companion entry to the prison. Do not record this in the log."
Walks-Softly: "As you command. You there, follow me."

If you talk to her before you enter the prison, she will urge you to leave.

"Something about that soldier ….
No matter. You should hurry." 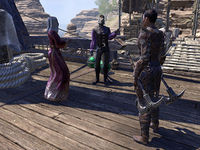 After you have rescued Zeira from the ship, Magnifica Falorah can be found on the deck being chatted up by Walks-Softly.

Walks-Softly: "Might I say, you are the most magnificent Magnifica I've ever met? You elevate the cesspit of Abah's Landing with your very presence."
Magnifica Falorah: "Who are you again?"
Walks-Softly: "But a humble Argonian who looks forward to comparing ledgers."
Zeira: "Apologies, Magnifica. We have much to discuss, when timing is more convenient for us both."

If you speak with her she will not seem to mind.

"Such an audacious display. I look forward to our future dealings.
I will smooth things with the Iron Wheel. Nicolas is their only prisoner to stand trial, now. A shame Taneth's ire shall fall entirely upon my former fiance."