"The common coinage of Tamriel, sometimes known as Drakes. Gold is accepted by most merchants" —Daily Rewards description 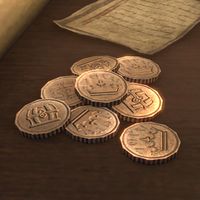 Gold is the main form of currency in Elder Scrolls Online. It is the most common type of loot, and is also awarded for completing quests, taking part in a campaign in Cyrodiil, and claiming Daily Rewards. Additional gold can be earned by selling items to NPC vendors or trading with other players. Gold is used to pay for most in-game services and is therefore very valuable. Although usually held in a character's inventory, gold can be deposited in a bank in order to transfer it to an alt or contribute towards guild expenses. It can be lost as part of the Justice System.

Gold rewarded for completing quests is based on both the level of a character and the type of quest (important/longer quests give out higher gold); ESO Plus members should multiply all values by ×1.1 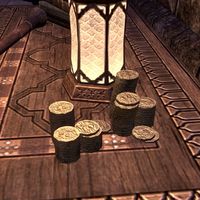