This article is about the landmarks. For the five ruins in Blackwood, see Ayleid Well (Blackwood). For the furnishing item, see Aetherial Well. 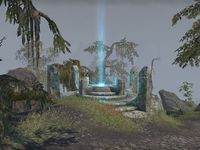 Ayleid Wells (or Aetherial Wells on Auridon) are reservoirs of magical power cast from meteoric iron, often found near Ayleid ruins. Activating a well will draw power from it, in the form of a ten minute unique health buff called Ayleid Health Bonus.

All Ayleid Wells have a cooldown period of ten minutes[verification needed — see talk page] after being activated and will appear inactive until the cooldown completes. In overland areas, the Wells are instanced for each player, meaning the only person capable of draining the Well is you and every Well you encounter during the cooldown period will appear inactive. In Cyrodiil and inside instances such as delves, Ayleid Wells are not player-specific, meaning the cooldown applies to everyone in that campaign or instance. Players who are grouped together and nearby will all receive the buff (and the associated cooldown) if any player in the group activates a Well.