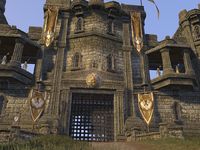 The Gate of Mnem is the gate guarding the Scroll Temple of Mnem. It is under the protection of Castle Bloodmayne. To open the gate, Castle Bloodmayne and Castle Faregyl must both be captured, although they do not need to be held by the same alliance. While closed, the gate can only be used by members of the Aldmeri Dominion, who frequently pass through when traveling between the contested areas in Cyrodiil and their safe zone at the Eastern Elsweyr Gate. The gate is guarded by a number of boss-level soldiers who have a high range of stealth detection, so it is inadvisable for members of enemy alliances to venture too close when the gate is closed. Similarly, assaulting the gate while it is open is best tackled by a group, as the guards respawn relatively quickly. It should also be noted that it is no longer possible for enemy alliance members to become trapped inside the Scroll Temple grounds if the Dominion recaptures Bloodmayne or Faregyl, thereby closing the Artifact Gate, as there are now steps up to the higher level of the gate, from which you can jump down to exit the area.

This Elder Scrolls Online-related article is a stub. You can help by expanding it.
Retrieved from "https://en.uesp.net/w/index.php?title=Online:Gate_of_Mnem&oldid=1878733"
Last edited on 19 November 2018, at 05:53