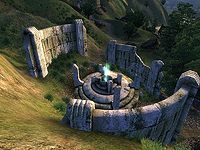 Meteoric Iron is a variety of Aetherial Fragment. It is the most common fragment to fall to Nirn. All known samples of the metal are a rusty brown in color. It is prized by armorers and enchanters for its properties in the forging of enchanted weapons and armors.[1] The Ayleids, known for harnessing Aetherial Fragments, incorporated the metal into their architecture. As such, it is a common sight in Ayleid ruins.[2] Meteoric Iron is resistant to most elements, and was used by the Akaviri Dragonguard to forge bulwarks against the Dragons' elemental breath.[3]

Meteoric Iron is the primary component of Ayleid Wells, enchanted artifacts found dotted throughout Cyrodiil. The wells are often located in the wilderness, far away from known Ayleid settlements, although they can sometimes be found outside Ayleid ruins. It is presumed that they harvest magical power from starlight. It is also suggested, without evidence or support, that they are located at the meeting points of ancient lines of magical power; however, modern arcane arts have discovered no perceptible evidence of such lines of power.[1] Ayleid Wells are regarded by scholars as the apex achievement of Ayleid magical art, and are believed to use Aetherial crystal to aggregate magicka from starlight even in subterranean locations.[4] Similar relics known as Aetherial Wells are also found on Auridon, where they were constructed by the Ancients.[5]

Charged wells radiate magical power back into the sky. Some scholars theorize that they are of religious or ritualistic significance, perhaps a means of offering magic back to the heavens. Those with magical talents can draw magicka from the wells to restore and buff their own reserves of power. No ritual or arcane knowledge is necessary, suggesting that the wells were designed to serve unskilled magic users. Drained wells replenish their magicka at midnight.[1] Drawing power from these wells has also been known to bless the user with improved vigor.[6]

According to legend, the Chim-el Adabal formed from the blood of Lorkhan when a drop fell down into an Ayleid Well.[7]