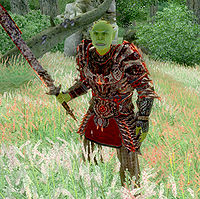 This article is about the NPCs. For the class, see Marauder (class).

Marauders are aggressive, blade-wielding NPCs. They are always hostile towards the player and will attack you on sight. Marauders are regularly found in fort dungeons, though you may find them occasionally in other types of dungeons as well, as summarized at Marauder Dungeons.

There are three basic varieties of Marauder.

Marauders are also frequently accompanied by dogs, who may actually appear in place of a marauder; this is usually to the player's benefit, as the dog is much easier to kill than a marauder.

In addition, Marauder Warlords are the marauder bosses, and are only found in dungeons. Eight dungeons have a single Marauder Warlord, typically as the final enemy you will encounter.

Lastly, you may encounter Dead Marauders. One Orc and one Nord marauder have been killed by other denizens of their homes before you ever arrive. You can find them in Dasek Moor, Fort Blueblood (×2), Fort Coldcorn and Fort Urasek.

All marauders are members of the Marauder Faction, which gives them a slight liking for Creatures and a pathological hatred of bandits.

There are several specialized types of marauders, who take part in a series of Mages Guild, Dark Brotherhood and Miscellaneous quests. These include:

* This item may be enchanted.

** The amount of possible potions received and the chance of how many changes depending on your level.

Battlemages have an incredibly large amount of magicka: they actually have three birthsigns: one for NPC Mages, which provides them with +50 magicka, one just for Battlemages which adds another 25 Magicka and the Atronach birthsign also available to the player. Added to their Altmer bonus, this means that they have +325 maximum magicka. It is therefore highly recommended that you use a silence spell or silence enchanted weapon against them to prevent the use of spell casting, Damage Magicka is generally not useful at all due to the repeated casting it would take to reduce the marauder's magicka to zero.

Each Battlemage will know how to cast four randomly selected spells: two Destruction, one Conjuration and one Restoration spell. In each case, the effect is randomly determined from the following list; the strength of the spell is randomly determined based on the battlemage's skill level. The possible effects for each school are: