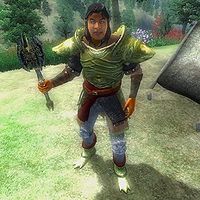 This article is about the NPCs. For the class, see Bandit (class).

Bandits are aggressive NPCs. They are always hostile towards you and will attack you on sight, with the exception of Highwaymen. Bandits are regularly found in campsites, although they are also fond of inhabiting caves, as specified in Bandit Dungeons.

There are three basic bandit varieties:

In addition, there are also three specialized type of bandits:

All bandits, including bandit bosses, highwaymen, and dogs, are members of the Bandit Faction, all with rank "Grunt" (although the faction has a "Boss" rank, none of the bosses have been given that rank). This faction ensures that they are allied with other creatures, but also ensures that they are bitter enemies of any Marauders. Black Bow Bandits and their ringleaders are also members of the Black Bow Faction.

* This item may possibly be enchanted.

Bandit Hedge Wizards have a large amount of magicka: they get +50 magicka from an NPC Mage birthsigns, plus their Breton bonus, giving them +100 maximum magicka. It is highly recommended that you use a silence spell or silence enchanted weapon against them to prevent the use of spell casting.