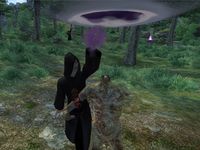 This spell allows you to summon various creatures to fight on your side. The more powerful the creature, the more costly the spell. You may only summon one creature at a time. Summoned creatures will not summon underlings. For example, Spider Daedra would normally summon Spiderlings, but summoned Spider Daedra are not able to do so. You can also attack summoned creatures and capture their souls; after three hits they turn hostile and attack you. You may not collect ingredients from summoned creatures after they're dead; they simply vanish into thin air.