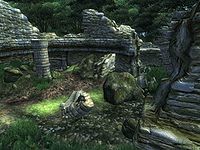 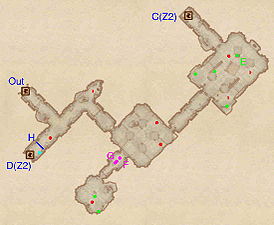 When you enter this zone, you automatically see a marauder at a T-intersection. The hall to the right has a door and is blocked by an iron gate (H) with the lever on the other side. This will serve as your shortcut exit later. Now you can only go left. There is a small room accessed from the first one you enter through a door. Be careful when coming in, though, as a pressure plate on the floor will trigger 2 swinging maces(G). The last room in this zone has many iron weapons and armor pieces at E and quite a few chests. Down the adjacent hallway at C is the door to the other zone, Fort Blueblood Halls. 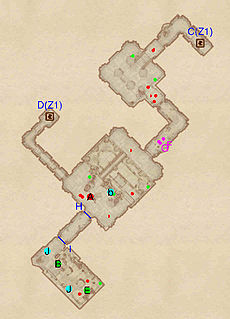 The first room contains quite a few marauders. The one nearer to the entrance is alone, but the others are clustered near the hallway. Past that, be wary of the Swinging Mace Trap (G) in front of the entrance to the large boss room, which is triggered by the Pressure Plate at F.

The large room contains the boss-level Marauder at A on the map and several other standard marauders. During the Mages Guild Leyawiin Recommendation quest, the Fort Blueblood Key can be found on the body of the Marauder Warlord. It opens the door to the last area, which, in contrast to the rest of the fort, contains two leveled monsters.

Manduin's Coffin (E) contains Manduin's Amulet during the related quest. As soon as you pick it up, Kalthar appears and attacks you, simultaneously locking the only exit with an unpickable lock. He has the key, and you have to kill him to get it. A fast-track out of this zone is by going through door D, which leads you back to the entrance on the other side of the iron gate.