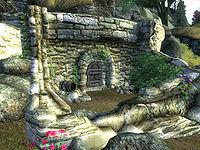 Upon entering Dasek Moor from door Out, head east at the intersection as the western tunnel leads to a dead end. You will encounter two paths. Both of them leads to the same two-leveled room; the first path will take you to the lower level and provides access to a tunnel leading to door E, one of the two available entrances to Dasek Moor Maleboge. The second path leads to the upper level, with a patrolling Marauder, two chests and what appears to be a Shrine overseen by a headless statue. Head east through the iron gate, then face another intersection; proceeding forward will take you to door D, the second entrance to the Maleboge, while taking the eastern tunnel will land you near door C, the only entrance to Dasek Moor Tombs. If you go for the Tombs, beware of the Pressure Plate at G, which will release the three Swinging Mace traps at F and remember a few lockpicks for the locked gate at H. 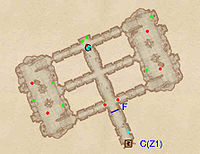 When you enter the Tombs from door C, you will witness a lone marauder fighting a whole gang of undead enemies behind the gate at F. Let the enemies dispose of each other, then pull the lever (cyan dot on map) and fight the remaining enemies. This is a typical tomb-like structure and you can explore it any way you want. On each side of the central passage are two chambers with several coffins, most of them without any valuables, although they are worth searching as a few of them contains minor loot and gold. A dead marauder can be found near two chests at the northern end of the central path.

Upon entering Maleboge from either door D or E (if you chose the latter, watch out for the pressure plate trigger at G), head south at the first intersection and follow the tunnel to a huge room with three levels, several statues, a boss-leveled marauder at A and an archer strategically placed at the bottom of the first set of stairs. After the inevitable fight, loot the boss chest at B and search the room for minor loot, then head back to Dasek Moor; if you have not yet cleared Dasek Moor Tombs, door D is the most convenient choice. Be careful, because a marauder battlemage is hiding behind door D in the Dasek Moor zone.