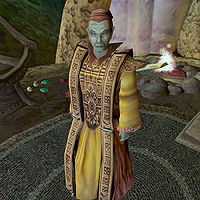 Therana is a Dark Elf mage and probably one of the strangest characters you will encounter during your journey through Vvardenfell. She is a Telvanni councilor involved in the Main Quest. As her peers will tell you, she has not aged well and has been growing increasingly insane. Despite seeming innocent and harmless when you talk to her, she is in fact very volatile, and given that she is a powerful mage - out-leveling even the Archmagister - her outbursts can prove deadly. She seems to have no material awareness, as she will hugely over-reward you for mundane tasks, giving you an enchanted Daedric cuirass and pair of greaves simply for retrieving a "bow that smells of Ash Yams", even though she no longer wants it when you bring it to her. She keeps a naked Khajiit slave, Ra'Zahr, in her room, and her stronghold is decorated with rotting Kwama eggs, which has infuriated the slaves who mine them for her. She ignores anyone's business other than her own, preferring to talk extensively about herself. For these and other reasons, many people — even in her own House — seem to want her dead, and there is an outstanding Morag Tong writ against her. She can be found in her tower in Tel Branora.

The other Telvanni Councilors often comment about how Therana has not aged well, and how she becomes more eccentric by the day. Her conversations with you will rapidly change subject; most options leading to an anecdote of her childhood. Even her Mouth, Felisa Ulessen, advises you to be cautious in your dealings with Therana, and upon giving you your first errand to Tel Branora, will provide you with a Scroll of Almsivi Intervention should things turn ugly.

She is wearing an exquisite robe with matching shoes, an amulet of spell absorption, a ring of firefist, and a ring of night-eye, she wields a daedric dagger, and she carries a scroll of black weakness, four exclusive restore magicka potions, and an Abebaal slave key. Aside from her natural resistance to fire and the sanctuary provided by her ancestors, she knows the following spells: Fifth Barrier, Llivam's Reversal, Absorb Spell Points, Fire Bite, and Firebloom.

As Therana's Mouth, Felisa Ulessen, will tell you if you choose to speak with her before going to Therana herself, getting the cranky (to say the least) sorceress to vote for you essentially boils down to keeping her attention long enough to ask the actual question. This end may be achieved in two ways: either her disposition towards you must be at least 80, or your Speechcraft skill must be at least 30:

Once you have secured her vote, you may (try to) revisit the topic with her, although she will make just as little sense as she did thus far:

Moreover, you can mention the topic to her after you have secured enough votes to officially be named Telvanni Hortator, in which case she says the following:

And finally, if you discuss the topic with her after you have actually been named Telvanni Hortator, she will say:

Speak with Therana with her new skirt in your inventory to offer it to her:

At this point, you can either do as Therana says and put on her new skirt, or have her slave, Ra'Zahr equip it instead. If you give the skirt to Ra'Zahr, the hapless Khajiit meets a swift demise at his mistress's hands. If you put on the skirt yourself and subsequently speak with Therana, you'll quickly learn why Felissa gave you two Scrolls of Almsivi Intervention:

When you later return to Therana, she will no longer be hostile, evidently having forgotten about the whole affair. If you try to discuss the topic with her, she will make as little sense as usual:

Once you have become Aryon's Mouth, you may speak with Therana again to receive a chore from the eccentric mage herself:

Return to Therana with the bow in your inventory in order to finish the quest:

After the end of this quest, Therana has the following things to say about this topic: