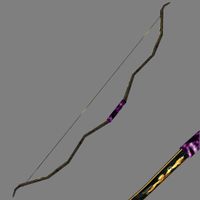 Auriel's Bow appears as a modest Elven Longbow, but it is one of the mightiest ever to exist in Tamriel's history. Allegedly created and used, like its sister Auriel's Shield, by the great Elvish demi-god, the Bow can turn any arrow into a missile of death and destruction. Without Auriel's power behind it, however, the bow uses its own store of energy for its power. Once exhausted of this energy, the bow will vanish and reappear whereever [sic] chance puts it. Its most recent appearances have been the subject of gossip for hundreds of years.

Telvanni Councilor Therana will talk to you about this bow, which she says "smells faintly of Ash Yams". She says the smell is strongest in Ghostgate near Ralyn Othravel. Ralyn can be found in the Tower of Dawn and is indeed carrying the bow, though you'll have to kill or pickpocket him in order to get it.