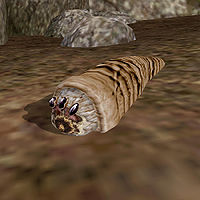 The smallest (and weakest) variation of Kwama, the forager is a worm-like creature resembling the head of a Warrior or Queen. It scouts land and caves, searching for new colonies and prey. Though aggressive, the Forager is not particularly dangerous. 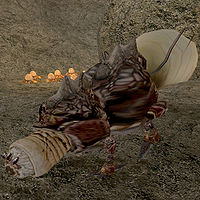 The largest of the Kwama which produces all of the nest's eggs. There is one Kwama Queen in every Egg Mine. They are too large to move and their needs are attended to by Kwama Workers. They are not aggressive unless provoked.

* These two IDs with the _c suffix are just like the others, only cured of Ash-chancre. They are not located anywhere in the game, and no reference to them has been found, so it's not known if these are just leftovers from testing or if they are actually used somewhere.

Aggressive Kwama which protect the nest from invaders. These may be Kwama, but they can be extremely dangerous for low to mid level characters. 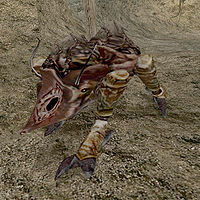 The primary source of labor in Kwama colonies, digging tunnels and attending to the Queen and eggs. It is not aggressive unless provoked. 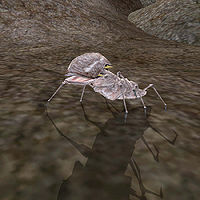 The larval form of the Kwama which is not very aggressive but can paralyze anything that attacks it. Their image is often depicted on banners, denoting that a tavern is nearby. Scribs are some of the creatures that may wake you when resting in the wilderness. Unlike most of those creatures, they won't attack but instead start wandering around the area listlessly.