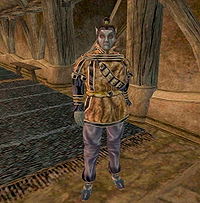 Dondos Driler in the Hlaalu Council Manor is your man

Once you reach the rank of Kinsman in House Hlaalu, any councilor or quest giver will tell you who to contact to start the construction of your very own stronghold (though you can actually start the process anytime after the rank of Lawman and Crassius Curio has seen you). Talk to Dondos Driler at the Hlaalu Council Manor in Balmora. He says you'll need to get a construction contract and a land deed in order to start the building.

Getting the Contract and the DeedEdit

Travel to see Duke Vedam Dren in the Grand Council Chambers in Ebonheart to receive the contract (he'll only ask for a vow to help his people). You can buy the land deed from Baren Alen at the Hlaalu Treasury in Vivec (its base price is 5000 gold and is bought like a regular item, so a high mercantile skill and disposition could lower this significantly). Return to Dondos Driler with the deed and contract and the construction will begin.

In a few days, you'll be prompted by an entry in your journal to talk with Driler. He'll provide the directions to your stronghold (the Odai Plateau, south of Balmora, past the Shulk Egg Mine, on the ridge) and ask you to check on its progress. The foreman on site, Durbul gro-Rush, will tell you that work should be finished within the week. Return to Dondos with the news.

After a few days, another journal entry will appear to inform you that the first phase of the stronghold has been finished. 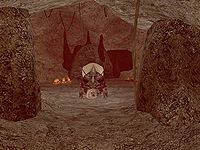 Once the first phase of your stronghold is completed, you can return to Dondos in Balmora. He will tell you that you need to improve business near your stronghold by restoring the nearby Shurdan-Raplay Egg Mine, just across the river. You can restore the mine by curing the blighted Kwama Queen and hiring some miners.

To cure the queen, simply cast a Cure Blight spell or scroll on her. Dondos says you can purchase scrolls from Hetman Abelmawia in his hut in Gnisis or Pierlette Rostorard in Sadrith Mora, but you may not have any luck with the latter. You could also get the Vivec's Touch spell from the Vivec Ashmask in the Gnisis temple. 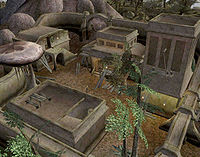 The Manor under Construction

As for the miners, talk to Dondos again and he'll suggest that you recruit some unemployed miners, especially from Redoran territory. You'll really only recruit one, and that would be either Ilasour Tansumiran, found in his cave-dwelling home north of the Temple in Gnisis, or Llaals Ores at the Slave Market of Tel Aruhn. (Llaals at this point in the game is a slave in the Tel Aruhn Underground). If you choose him, talk to Savile Imayn to learn that you'll need to cure the Kwama Queen (if you have not already done so) to secure his release. Whichever miner you chose, return to Dondos afterwards. You may find that neither miner will actually go to the mine, and will instead remain where you found him, but this will have no effect on the stronghold-construction quest. Some users report that this minor glitch appears to be resolved in the Game of the Year edition. (If the miner does not arrive and this bothers you, you can use the PositionCell Console command to move him there manually.)

Once the second phase of your stronghold is finished, and you've reached the Hlaalu rank of House Father, you can begin the third and final phase of construction. Speak with Dondos again, and he will tell you that you need to get rid of the bandits in the area of your stronghold. To do that, he says you'll need to hire a guard (regardless of your character's prowess), and suggests you seek one at the Balmora Fighters Guild or the Imperial Legion at Moonmoth Legion Fort.

Moonmoth Fort will have no one to spare, but speaking with Flaenia Amiulusus at the Balmora Guild of Fighters will get you a guard named Fjorgeir for 1000 gold. It is only necessary to hire the guard to tell you where the bandit hideout is. If you have already found the hideout on your own, you can simply go straight there and eliminate their leader (or the whole lot), without having to hire the expensive guard. However, you may find him useful, as he will remain a companion, while he lives, whom you can take to other fights (or just station him at your stronghold when you don't need him).

If you hire Fjorgeir, travel to your stronghold to meet him and talk to him about the bandits. The bandits are hiding out in the cave of Zainsipilu which is southeast of the stronghold. Follow the Odai River south until you come to a wooden bridge, with a nearby sign pointing west to Hla Oad and east to Seyda Neen. Follow the path east toward Seyda Neen, which winds its way between bubbling mud pools. After a short distance, you will find the cave north of the path. Travel there (with or without the guard) and kill the leader of the bandits, Maros Gimayn. Killing the other seven bandits is optional.