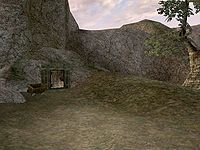 Shulk Egg Mine is a large House Hlaalu egg mine located south of Balmora along the banks of the Odai River. 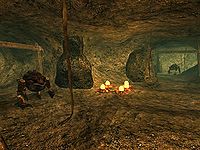 The interior of the mine

The mine is owned by Hlaalu noble and House Councilman Dram Bero, who lives in the St. Olms Canton in Vivec. Shulk Egg Mine is the largest single source of Kwama Eggs in all of Vvardenfell. 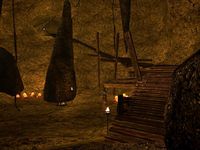 The mine is worked by six miners, two of whom are found just outside the entrance to the mine, and four who are found in the miner's camp inside. In addition there are two ex-miners who are involved in egg poaching, and are the targets of a Fighters Guild quest. 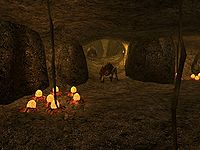 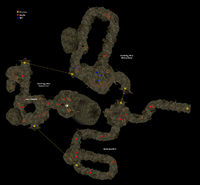 Interior map of Shulk Egg Mine

The mine makes a subsequent "prequel" appearance, in Elder Scrolls Online, set several hundred years in Tamriel's past: in a prior incarnation as Shulk Ore Mine (what type of ore is not specified, or seen in-game). At the time, its miners have just been killed or driven off by anti-Vivec cultists, but even when the mine is cleared, there is dialogue suggesting that the mine's ore veins are just about worked out anyway, and they might have to bring in kwama to repurpose it as an egg mine.