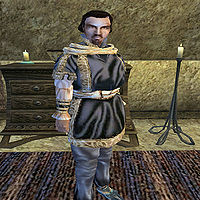 Crassius Curio is an Imperial noble and a Councilor of the Great House Hlaalu, who owns a manor in the Hlaalu Plaza of Vivec. To become Hlaalu Hortator, part of completing the Fourth Trial in the Main Quest, he may request that you give him a kiss, and will also refuse to sponsor you in Great House Hlaalu until you undress for him. He will ask these favors regardless of your gender.

Curio is rumored to be a great patron of arts, having commissioned some artists to do a mural for him. Curio is also a writer, having written the plays "The Lusty Argonian Maid" and "The Dance Of The Three-Legged Guar" (which does not appear in the game). He wants to start a theater troupe and likes to be called "Uncle Crassius." He owns a copy of the rare skill book Lord Jornibret's Last Dance. Despite his eccentric qualities, Crassius is one of the few in House Hlaalu who is truly against corruption. Many of his quests deal with ending the corrupt reign of Odral Helvi in Caldera, during which you can either complete the shady quests according to Helvi's orders or ask Crassius what to do.

He wears an extravagant shirt with matching pants and shoes. He carries a copy of his play, The Lusty Argonian Maid. Aside from his natural charm and ability to absorb fatigue from others, he knows the following spells: Resist Fire, Seryn's Gift, Cure Poison, Balyna's Antidote, and Free Action.