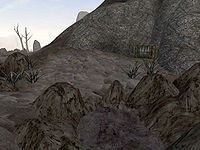 Zainsipilu is a small bandit cave southeast of Hla Oad. 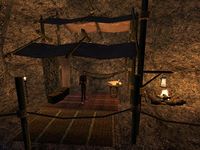 The cave is situated across the Odai River, on the west side of the mountains that follow the road.

It has two branches of tunnels that lead to three major areas, the first being the slave den, second is the warehouse, and third is the bandits' quarters.

In the third phase of building your House Hlaalu Stronghold, Dondos Driler asks you to eliminate the eight bandits in order to secure the safety of your egg mine.