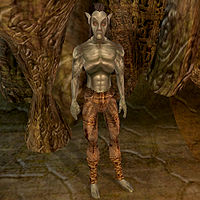 Llaals Ores is a Dark Elf miner found in Tel Aruhn. He used to work as a miner, but has now been sold into slavery. Unaccustomed to life as a slave, the slave master Savile Imayn considers him "rebellious and lazy" and is willing to sell him cheaply. Aside from his natural resistance to fire and the sanctuary provided by his ancestors, he knows no spells.

If you are a member of House Hlaalu, you can buy him from Imayn for 200 gold to have him work for you in your Stronghold as a miner in your Egg Mine.