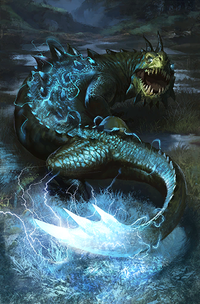 The Wamasu (also called Wamasus[1] and colloquially, Swamp Dragons)[2] are large reptilian beasts that hail from the province of Black Marsh, known for their lightning powers and tough exterior. Their existence is largely shrouded in myth by anyone other than the Argonians, only ancient tales from Nordic explorers and hunters are privy to their existence. The expedition of Sotild Blood-Rood[2] and stories from the northern men have been the best source regarding them.[1]

Despite the mystery surrounding them, the wamasu are relatively common across the southeast province but are indeed rare across the other lands in Tamriel. They are known to inhabit the mountains and wastes across Craglorn in northeast Hammerfell, and rarely throughout other parts of the ocean, like the Iliac Bay[3] and the Sea of Pearls.[4] The wamasu provides bountiful resources that are considered valuable across the provinces, precisely their sturdy hide and their luminescent organs, which are used in making tarps and lanterns respectively.[5][6][7] There are wamasu handlers that utilized prods insulated with hist sap to guard against their electrical discharges.[8]

Wamasu bones are black and are said to carry electricity, which remains for several years and gives out a tingly feeling.[9] They are known to produce eggs, which emit lightning as the embryo fertilizes and grows. It is ready to hatch once the lightning is gone.[10] Some groups like the Order of the Hour and the Scaled Court have been known to procure these creatures and keep them away in dungeons. The latter faction used these creatures to create a chimera of several other beasts to make the Mantikora.[11] Native tribes of Argonia such as the Dead-Water Tribe and the lizard-folk of Mazzatun have weapons and armor inspired by the wamasu.[12][13] One of the most well-known examples of the wamasu is the legendary beast of Shadowfen, the Haynekhtnamet.[1] References to this beast date back several hundred years prior to 2E 582. The locals would provide offerings, believing that it would cease the seasonal flooding.[14]