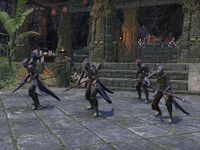 The Dead-Water Tribe, or the Naga-Kur in Jel, as they more commonly refer to themselves, are a tribe of Naga Argonians residing in a village in western Murkmire. However, they seem smaller than the normal size for people of their kind, at around the same height as the player character. Unlike the tribeless Nagas that inhabit the region, the Naga-Kur are proud warriors, deeply entrenched in tradition. They are feared by neighboring tribes due to their brutal ways and are considered hostile to outsiders. However, some members of the tribe defend their undiplomatic nature, claiming that outsiders "mistake a show of strength for hostility" and that what outsiders "call inhospitable, we consider prudent."

The Dead-Water Tribe are led by their aged and irascible war-chief, Raj-Kaal Seelan, while their novice warriors are trained by their ka-deelith, Mewah-Jez, who prepares them to walk the Path of the Lily, a series of warrior trials. Following the completion of Death Among the Dead-Water, Kishi will be appointed as a ka-deelith alongside Mewah-Jez, whose ineffective teaching methods he has criticized as leading numerous young warriors to their deaths.

This Elder Scrolls Online-related article is a stub. You can help by expanding it.
Retrieved from "https://en.uesp.net/w/index.php?title=Online:Dead-Water_Tribe&oldid=2407156"
Last edited on 10 May 2021, at 23:34