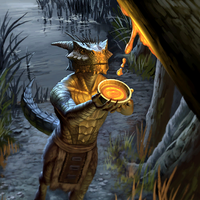 A Tree Minder collecting the Hist sap, as seen in Legends

Hist Sap is a substance made out of the Hist's very spirit.[1] When Hist Sap is licked by an Argonian, the Hist is capable of communicating with the Argonian through visions.[2] The sap of the Hist seems to increase the combat prowess of those who drink it. Hist sap has the ability to 'alter' living organisms, which may explain the origin of the Argonians.[2] Ingesting large quantities of Hist-Sap is often dangerous, even for Argonians. The Sap-Speakers of the Miredancer Tribe, known for communing with their Hist and ingesting large amounts of sap in the process, often suffer the effects of sap-poisoning, including "gold tongue" (permanent change of mouth pigmentation to a golden hue), "bark scale" (thickening and darkening of surface scales), and unwanted hallucinations among other symptoms.[3] The Blackwood Company smuggled a Hist tree from Black Marsh to their headquarters in Leyawiin, and extracted the sap to exploit this. However, when consumed by non-Argonian species, the Hist sap had strong hallucinogenic properties that sent them into dangerous bloodlust, though the poor treatment of this particular tree affected the sap causing similar effects on Argonians, as well.[4] At the end of the Third Era, a recruit of the Fighters Guild sabotaged the Hist extraction mechanism, destroying the tree in the process.[5]

A similar substance known as Amber Plasm is also produced by certain Hist trees. Despite its appearance, it is not Hist Sap and is instead a form of chaotic creatia from Oblivion which leaks into Mundus through the Hist like blood from a wound.[6]