By reading the Black Book Epistolary Acumen, you are transported to the realm of Hermaeus Mora, Apocrypha.

If this is your first trip (not counting the one where you first meet Miraak), Hermaeus Mora will appear, floating above the platform as a tentacled eyeball. He will speak to you of Apocrypha's seductive wealth of knowledge.

Chapter I opens on a small platform. As is common in Apocrypha, if you approach the edges, tentacles may reach out of the water and whip you. Activate the scrye at the platform's center to lower a bridge to a moving corridor. Jump onto the moving passage, taking care not to fall into the dark water. The parts of the bridge that bend actually have porous walls; if you do not actively move with the bridge's flexing, you'll pass through these walls and drop into the poisonous water. Hop off at the platform on the far right, then activate a second scrye and lower a second bridge. Jump back into the moving passage and ride it back to that bridge. Read the book on the pedestal here to access Chapter II.

Travel down the narrow pathway and activate another scrye. The corridor will unfurl to become the floor of a room, where you battle a lurker and a couple of seekers. Once they are dealt with, activate a scrye on the eastern side of the room in order to open up the large gate to the west. To the southeast is a pod you can loot. Through the gate, to your right is another pod, and right in front of you is Chapter III. 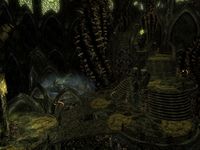 The start of Chapter III

Follow the pathway around and up several sets of stairs, eliminating the seekers as you go. To the left of your entry point, there is a font of magicka surrounded by a pool of poisonous water that will restore your magicka reserves. There is another one located at the top of the stairs, where you will also encounter a moving tunnel similar to the one encountered in Chapter I.

If you choose to get off at the closest platform, you will be greeted by a lurker, and two seekers will fire at you from a platform below. Drop down the far side of the lurker's platform to kill them, then activate a scrye around a corner to the southwest in order to return to the starting platform. The last and farthest platform contains two seekers and a pod full of loot, with a font of magicka hanging on either side.It also has three skill books. 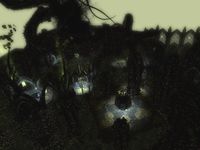 To reach Chapter IV, do not jump on the platforms. Instead, activate the scrye at the end of the moving passage to open the gate, and defeat any seekers that appear as you move forward. As soon as you reach the end of the next passage, it will move to the left and a bridge will lower, leading to a lurker. At the end of the path, there will be another move to the left, and you will approach the gates you activated before, but this time from the left side. Activate the scrye to open them again and continue on, avoiding the tentacles that reach out at you from the water. Eliminate the seekers as you walk down the path to Chapter IV. 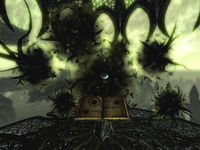 A Daedric Prince wants to make a deal

Be prepared to move quickly; you may spawn in this level standing in a pool of the poison fluid. You may recognize the location below the platform as the setting of Chapter III. Loot the vessel to the left and activate the scrye. The large capsule containing the Black Book: Epistolary Acumen will open. Walk up to the Book and read it to summon Hermaeus Mora.

The following dialogue is dependent on the status of the quest Discerning the Transmundane. If the quest has been completed, Hermaeus Mora greets you in one of two ways:

Alternatively, if Discerning the Transmundane has not yet been completed, he will simply greet you with: "All seekers of knowledge come to my realm, sooner or later." Either way, the following set of dialogue choices becomes available, where he reveals that you cannot hope to surpass Miraak without the last word of power:

Regardless of what option is chosen, Hermaeus Mora ends with: "I know what you want: to use you power as Dragonborn to bend the world to your will. Here then is the knowledge you need, although you did not know you needed it. The second Word of Power. Use it to bend the wills of mortals to your purpose. But this is not enough. Miraak knows the final Word of Power. Without that, you cannot hope to surpass him. Miraak served me well, and he was rewarded. I can grant you the same power as he wields, but all knowledge has its price."

Next, he reveals his price for the Word of Power, knowledge for knowledge:

After this section, the conversation ends with the following set of options:

Regardless of what option is chosen, Hermaeus Mora parts with: "Send the Skaal shaman to me. He holds the secrets that will be mine.", referring to Storn Crag-Strider.

Just before Hermaeus Mora fades away, he teaches you the second word to Bend Will. After this, you may choose from one of three powers emanating from the Black Book:

Only one ability from the book may be accepted at a time. To return to Solstheim, use the Black Book in front of you or access it from your inventory. 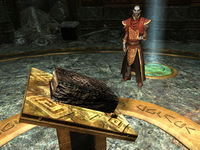 "What happened? What did you see?" 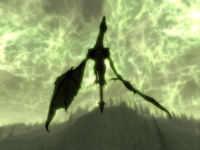 Krosulhah attacking upon your exit

After reading the book, you are returned to Nchardak, where Neloth will approach and ask: "What happened? What did you see? Different people have very different experiences when reading these books."

You can give him two possible answers:

If you explain to Neloth that Hermaeus Mora wants the "secrets of the Skaal" in exchange for the third word, Neloth replies: "Hmph. What secrets could they have worth keeping from old Mora? Sounds like a bargain to me. Hermaeus Mora learns some fascinating new ways to skin a horker and you become the second most powerful Dragonborn that ever lived. Well, that gives me a lot to think about. I need to get back to Tel Mithryn. I have some ideas about how to locate more of these Black Books..."

Alternatively, should you die within Apocrypha before speaking to Hermaeus Mora, a different option is presented:

I found myself in another place: "That's a fairly common experience, at least for those who remain coherent enough to report what they've seen. You were in Apocrypha. Or at least your consciousness was - your body remained here of course. You should read the book again until you reach what appears to be the "end" - then you will have fully understood the knowledge it contains."

After this, if you return to Apocrypha and come back, Neloth will ask with skepticism: "Did you actually learn what you needed to know by reading that black book?"

Regardless, when Neloth leaves, you can go back downstairs for the five cubes, which have a base value of 50 gold; they are just minor loot at this point.

After exiting Nchardak, it is revealed that Miraak has sent a dragon named Krosulhah to ambush you. He hovers above the ruins and bellows: "Miraak has commanded your death. So it shall be." before attacking. Following his death, travel to the Skaal Village and talk to Storn, who can be found meditating outside his hut.

The Secrets of the SkaalEdit 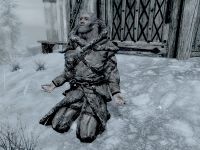 "So it falls to me to be the one to give up the secrets to our ancient enemy."

If you have yet to cleanse the All-Maker Stones, Storn will say that he is too weak to face Hermaeus Mora, as the Oneness of the land is disrupted. You will need to complete the related quest to restore the shaman's connection to the All-Maker before he will agree to help you.

Once the Sacred Stones have been cleansed, return to Storn and ask him about the secrets of the Skaal, to which he replies: "Hermaeus Mora... old Herma-Mora himself. So he is the source of Miraak's power. Of course. We have many tales of Herma-Mora trying to trick us into giving up our secrets to him. And now he comes again for what we have long kept from him."

Next, three optional questions become available, each of which give additional insight into the relationship between the Skaal and Hermaeus Mora:

Back to the matter at hand, the following set of options are presented:

He said it's the only way he'll teach me the final Word of Miraak's Shout:

You mean you'll give him what he wants?:
"Yes. The Skaal also tell of the day when we must finally give up our secrets. When Herma-Mora finally wins. As shaman, it is my duty to guard these secrets, but also to decide when it is necessary to give them up. I believe that time is now. If I am wrong, may my ancestors forgive me. Give me the book. I will read it, and speak to old Herma-Mora myself. I will make sure he lives up to his part of the bargain."

I hope you know what you're doing. (Give book):
"That is my hope as well. I am trusting you will make this sacrifice worthwhile." 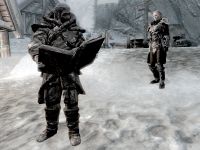 When you hand him the book he will walk into the center of the village, while Frea will shout: 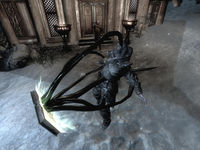 While seemingly unconvinced about Hermaeus Mora's intentions and promises, Storn then opens the book. Seconds after, several tentacles shoot out from its pages and grab him, one of them piercing into his brain, while Mora gloats: "At last, the Skaal yield up their secrets to me." While the secrets of the Skaal are drained out of him, all Storn can utter is: "You... liar... gah! ... I won't... not... for you..."

Hermaeus Mora will then speak to you: "Dragonborn, you have delivered me the gift I requested. In return, I keep my promise, as befits a Prince of Oblivion: I give you the Word of Power that you need to challenge Miraak. You will be either a worthy opponent or his successor, as the tides of fate decree." When you finally receive your gift, Mora will let go of Storn who will shout: "Nooo!" and fall to the ground, dead.

Frea will rush to her father's lifeless body and cry out: "Father! What have you done!" She will then look directly at you: "Go. My father sacrificed himself so that you could destroy Miraak and lift his master's shadow from the land. Go, then. Kill Miraak. Do not fail." She will then stay by her father, while all the citizens of Skaal Village pay their final respect to their old shaman: 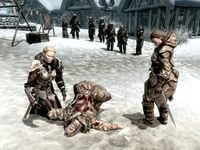 "We won't forget what you did for us, Storn Crag-Strider."

Fanari Strong-Voice: "Goodbye, old friend. We will miss you, but do not worry. Frea will guide us well, thanks to you."
Edla: "We won't forget what you did for us, Storn Crag-Strider. Walk with the All-Maker."
Deor Woodcutter: "Frea... I'm sorry."
Aeta: "It can't be... please, All-Maker, send him back to us..."
Baldor Iron-Shaper: "I... uh... you'll be missed, old man."
Finna: "May the All-Maker guide your soul to the next life."
Nikulas: "Frea... what happened? What was that thing? I thought the village was safe now."
Wulf Wild-Blood: "Return to the All-Maker, old one. The Skaal will never forget your sacrifice."
Morwen: "I don't really understand what you did, but I trust you did it for the good of the village. So... thank you."
Tharstan: "By the gods... I've never seen anything like it... I, uh... I don't think this will go in my book."

This ends the quest, and starts At the Summit of Apocrypha.