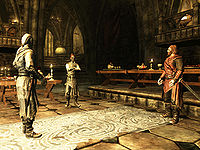 Having completed Bloodline and accepted Lord Harkon's gift, speak to Garan Marethi to deliver Harkon's message. Though vague, he will understand and tell you about the Bloodstone Chalice, an artifact able to increase the potency of vampire powers. He'll ask you to follow him to the artifact; along the way, you'll come across Orthjolf and Vingalmo, whose interest in your task hints towards things to come.

Garan: "Excuse us. I need to fetch the Bloodstone Chalice."
Vingalmo: "The Chalice? Why?"
Orthjolf: "What're you up to, Garan?"
Garan: "Lord Harkon's orders, Orthjolf. Calm yourself. Our friend here has been ordered to fill the Chalice."
Orthjolf: "Really?"
Garan: "Indeed. He/She's off to Redwater Den."
Vingalmo: "Well, then... Best of luck to you."

Continue on to the chalice room, where Garan will give you your detailed orders. You'll need to travel to Redwater Den and fill the chalice from the Bloodspring there. Once that's done, you'll need to add the blood of a powerful vampire to it. Garan will warn you that Redwater Den is inhabited by "less reputable members of society", and send you on your way.

Travel to Redwater Den, a skooma trading hub. Approaching what looks like an abandoned shack, there are two lookouts keeping watch, who will direct you downstairs, assuming you're there for skooma. After entering through the trapdoor in the back, you will have to pass by a doorman who warns you to "keep your weapons to yourself" before allowing you to enter the door. Downstairs, you'll find a Dealer behind a locked, gated counter, and past her, a corridor of booths set up for enjoying skooma. There are various NPCs through here who are currently under the effects of the Redwater Skooma, content to ignore you and get their fix. Walking along the corridor is an attendant who will tell you "That door is locked for a reason" if you approach the locked gate at the end of the hall with him nearby. From this point there are two ways to continue on, both leading to the same destination:

Regardless of the option chosen, you will end up in a large open area full of vampires and thralls, who you can overhear discussing the spring:

Thrall: "So why don't you just drink the blood from the spring? I mean, that seems easier than running a skooma den..."
Vampire: "The boss said it's some sort of profaned spring. It looks like blood, but it's not the real thing. Drinking it gives you strength, but it also gets you pretty messed up... That's why we thought of putting it in the skooma."

Be careful during the fight against these vampires as there is a gate on the ground that is extremely hard to see due to the low lighting; if stepped on it will open—dropping you in a spike pit below the room and requiring you to climb the spiral ramp back out. Continuing on, you will head up a ramp to the east which leads to a pull chain — opening the gate to your left as well as a door directly across from you. From here, you will follow through a fairly linear set of corridors and rooms lined with coffins, most patrolled by vampires and Death Hounds. If you see a Death Hound, there is a good chance it is closely followed by its master. Following along you will encounter Venarus Vulpin. Kill him and take the key to the next door from his body, and finally you will reach the end of the dungeon—the Bloodspring.

Approaching the spring will prompt you to fill the chalice; upon doing so, two vampires, Stalf ‎and Salonia Caelia, will enter through the back door. After a short conversation between themselves, it becomes clear that you are to become the latest casualty in Vingalmo and Orthjolf's politicking.

Salonia: "It's really too bad, you know. The little accident you had here, completely unexpected..."
Stalf: "Yeah, too bad. Lord Harkon's new favorite, dead so soon after joining the family."
Salonia: "We're just lucky I was here to return the Chalice to Vingalmo, so he could make sure Harkon gets it back."
Stalf: "Wait, what? That's not what we agreed. We take it back together."
Salonia: "Idiot. You didn't really think I'd let you walk out of here either, did you? Vingalmo wants you both dead."
Stalf: "Well that's just fine. Orthjolf told me to finish off anyone who got in the way." 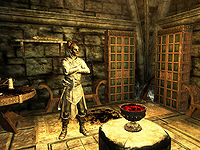 They will then become hostile toward you, so do what you have to do. Once dispatched, your quest journal will be updated with the objective to "Fill the chalice with the blood of an ancient vampire" which requires you to select one of the two you just killed, filling the rest of the chalice with their blood. Take the door they entered from, which is now unlocked, and you'll find that it leads up to the main area of the skooma den, ending up leading through a hidden door in the stockroom behind the dealer's counter. Once back in the main room, whatever inhabitants are still alive will be vampire thralls. Make your way past these, and return to Garan to tell him what happened.

Garan will explain to you that Vingalmo and Orthjolf long for Harkon's throne, but can't make overt moves against him; this is why each sent an underling to kill you and return with the chalice. Robbed of their servants, neither of them will be able to act against him through them any more. He comments on the politics of the court and warns you to be careful who you trust. He then informs you that Harkon wishes to speak to you himself, leading to the next quest.

Notes
* Any text displayed in angle brackets (e.g., <Alias=LocationHold>) is dynamically set by the Radiant Quest system, and will be filled in with the appropriate word(s) when seen in game.
Retrieved from "https://en.uesp.net/w/index.php?title=Skyrim:The_Bloodstone_Chalice&oldid=2701832"