Dwarven weapons and heavy armor are medium-quality items of Dwemer design that are made from Dwarven Metal Ingots. The secret of creating Dwarven Metal was lost with the Dwemer, and therefore it is one of the two metals that can't be mined, the other being Steel. However, the Dwemer left large amounts of scrap metal behind in their Dwarven Ruins, and this scrap metal can be smelted into ingots. See the Lore article for general information.

Six different types of scrap dwemer metal can be smelted to yield Dwarven Metal Ingots. The following lists all of these scraps, along with the number of ingots that each produces when smelted and the total number of guaranteed samples that can be found.

The total column provides the total number of ingots that could be obtained if all of the metal in each location was retrieved and smelted. Only locations containing multiple items are included in the following list.

The Dwarven Smithing perk also causes tempering of Dwarven weapons and armor to be twice as effective. This perk applies to both unenchanted Dwarven gear and enchanted gear (generic armor, generic weapons, or custom), as long as the Arcane Blacksmith perk has been unlocked.

Dwarven armor is a variety of heavy armor that is only better than Iron and Steel (and unimproved BonemoldDB) armors. It appears in leveled lists starting at level 12 (enchanted varieties at level 13). All items can be tempered using 1 Dwarven Metal Ingot, and having the Dwarven Smithing perk doubles the quality improvement. 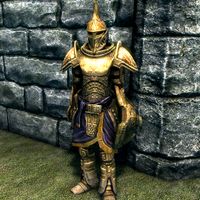 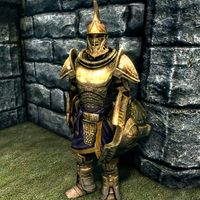 Dwarven weapons are better than Iron, Steel, and Orcish weapons. They appear in leveled lists starting at level 12 (enchanted varieties at level 13). All items except ammunition can be tempered using 1 Dwarven Metal Ingot, and having the Dwarven Smithing perk doubles the quality improvement. Ammunition can only be smithed if the Dawnguard add-on has been installed.

†The base gold value used for all generic enchanted versions of the Dwarven Bow is 95 instead of 270. This means that the enchanted weapons are 175 gold cheaper than they should be, and in several cases are cheaper than the unenchanted bow. This bug is shared by several types of bow in the game.
‡This item can only be acquired or crafted by siding with the Dawnguard. See Ancient Technology for details.
¥The Enhanced Dwarven Crossbow has an additional property: Attacks with this crossbow ignore 50% of armor.
±Crafting crossbows and exploding bolts is only possible at Gunmar's forge in Fort Dawnguard, which does not appear until after A New Order (must side with the Dawnguard). Normal bolts can be crafted at any forge.