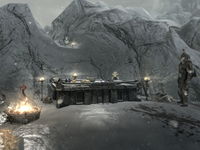 There are a total of four bandit camps to track down

To begin the quest, locate the Khajiit trader Ri'saad. He and his caravan often travel through Skyrim, but will stop for several days outside of major cities such as Whiterun or Windhelm. Upon locating him, you will have a new dialogue option to ask about the trouble his caravan has been running into. Wishing to remain discreet, he will give you a note explaining the situation. As the note explains, recently his caravan has been beset by strange new bandits at two locations - one near North Brittleshin Pass and another near Fort Kastav. The only other information he can provide is that one group wears gleaming golden armor while the other wears dark armor.

Tracking down the two camps, you will find each location containing 3-4 bandits and a cage. Each group's leader will have a journal indicating where the leader of their respective gang is at, along with a key to the camp's cage. Inside each cage is an Elytra Nymph that you can talk to and obtain as a pet. Obtaining both pets will complete their respective miscellaneous quests. At the first saints bandit camp, be sure to loot and read the Notes on the Blacksmith off the corpse of the Saints Bandit Leader to begin a quest to unlock Golden and Dark smithing. At the first seducers bandit camp is a knapsack containing the Bandit's Note on Hidden Treasure, which upon reading it will start a miscellaneous quest to unlock a Daedric artifact.

Using the information from the bandit leader journals, locate and kill the true gang leaders - Kinthal for the Saints and Svarig for the Seducers. Be sure to loot the two unique soul tomato soul gems at the altar Kinthal is located at. Combining the information from both journals will explain that the bandit gangs were funded by a wizard named Thoron, and that he seems to be hiding out in the sewers beneath Solitude. Reading either of the leader's journals will start the next quest Restoring Order, although it will take both journals to know exactly where Thoron is at.

With this information in hand, return to Ri'saad and let him know the two groups are no longer a danger. He will thank you and reward you with 300 gold, thus completing the quest.