Brittleshin Pass is a small passage through the mountains between Whiterun Hold and Falkreath Hold which is occupied by Warlocks and Skeletons.

There is a path up from a jetty on the shore of Lake Ilinalta to the cave entrance. Shortly before the entrance there is a snowberry bush on the right of the path. Opposite the entrance is a stack of rocks with a flag attached.

The path heads south from the road between Whiterun and Markarth. Just past a rock cairn on your right you'll see a large fallen tree, and inside the hollow trunk is an apprentice-locked strongbox. Go past some mammoth bones and then on your right, a pile of rocks with a flag attached. Next on your left is a rock with three tundra cotton plants by it. Finally on your right, a ribcage of a mammoth with a blue mountain flower beside it, with a second blue mountain flower on the other side of the entrance. 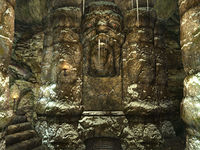 From the southern entrance, you enter a narrow tunnel full of vegetation leading down to the north. The lit brazier ahead marks the transition into a ruined room with rubble on one side. A fly amanita fungus is behind the fern on the right as you enter the room. Opposite is a double iron door with a hanging moss growing over it and a second growing from a ledge with a lit brazier to the left. There are sideboards on either side of the door, but the one to the left is broken.

Through the iron doors is a large room on multiple levels, you are on a ledge with two rock pillars opposite you, with a stone face carved high on the wall with flawless garnets for eyes that can be dislodged with a ranged shot or the Flames spell. On your right is a lit brazier and past this is the path down. Be aware there are two skeletons at the bottom. Following the path down you pass an open sarcophagus on your right and a second fly amanita on your left and another by the first pillar. There is yet another fly amanita to the right at a dead end with iron ore veins on both side walls. The path continues between the ledge you've just descended from and the pillars. Behind the second pillar are a flight of stairs up to an area with a fly amanita fungus and an apprentice-trapped chest that activates a swinging mace trap. To the northwest is a tunnel exiting this room, there is a fly amanita fungus on each side of the tunnel mouth.

The tunnel heads down a flight of stairs to another lit brazier at the bottom. In this tunnel overhead, there is a very hard to reach Web Sac. You can hear another skeleton and the tunnel turns to the southwest and opens into another room. You can see a leveled necromancer in front of you up a flight of stairs, facing away from you. The skeleton is just out of sight to the left. Taking out the necromancer with a bow will draw the skeleton out into view. 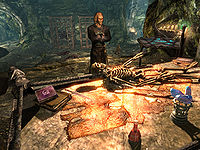 In the room, on your left is a stone table. On the table is a wooden bowl containing a human heart. There is blood all over the table and floor of this room. To the right are a couple of nearly completely buried sideboards. To the south is the flight of stairs leading up to where the necromancer stood. At the top, on your left against the south wall is an arcane enchanter. In front of you is an altar with a skeleton that can be looted, a random vigorous potion, a random filled soul gem, a random enchanted dagger and copies of Ancestors and the Dunmer, The Book of Daedra, The Arcturian Heresy and a copy of the conjuration skill book The Warrior's Charge. There are lit braziers at either end of the altar. On your right against the north wall is an upright opened sarcophagus. At the bottom of the stairs to the left is a fly amanita fungus.

On your right as you enter this room are two cages, the first is adept-locked and empty, the second has two iron arrows on the floor and the door is open. Against the west wall is a slightly raised area with a hay pile on the left and various crates and a barrel to the right. On top of the barrel is a quiver of iron arrows, an apothecary's satchel, and two weak lingering poisons. Between these and the cages is an exit to the northwest. There is a lit brazier on your left and behind this is an unlocked boss chest (if you have been sent here to retrieve an item this is where it will be). 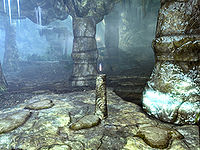 To the northwest is a stone bridge to a pillar with a wooden ramp spiraling down around it. At the bottom of the spiraling ramp is a botched up straight ramp to the cave floor. At the top of the straight ramp is the top of a hanging moss plant. There is another at the bottom on the other side of a lit brazier. There are two skeletons patrolling in this area and also quite a bit of vegetation and several pillars. To the northeast is a spellcaster trap that uses a filled petty soul gem and casts Icy Spear even at low levels which makes it extremely dangerous to injured or weak characters. It is in a clear area with five pillars around it. There are stairs leading up to the northeast behind it. At the top of the stairs is the tunnel to the northern entrance.