Letters from the Red YearEdit

Upon installing the Sunder & Wraithguard Creation, you will be directed to the New Gnisis Cornerclub in Windhelm in relation to a trove of old refugee letters from the Red Year which have recently been uncovered. A Lost Caravan Guard's Note can be found sitting on the bar top and can be freely taken. Reading this note will reveal that a highly secretive smuggling operation had been organized to transport some unknown cargo through Skyrim, using the refugees fleeing Morrowind as cover. Several decoy caravans were employed to transport this cargo, each with a code name based on the Great Houses of Morrowind.

The author of this letter was part of the Telvanni caravan, and was reportedly carrying the cargo towards the Nightgate Inn. The destroyed remains of this caravan can be found half-buried in snow along the road between Windhelm and the inn, just north of the entrance to Bronze Water Cave. Several destroyed Dwarven automatons surround the carriage, along with the skeletons of the unfortunate caravaneers. Unfortunately, the elusive cargo is nowhere to be found, although a Carriage Driver's Note can be found within an "Old Caravan Chest" at the wreckage. The author of this note complains of attacks from Dwarven automatons as well as "singing" coming from the cargo. It also reveals that the items were handed off to the Sadras caravan, which was heading for Whiterun.

The next ruined caravan can be found just off the road east of Loreius Farm. You will be greeted by a familiar scene of Dwarven machines and skeletal corpses. One such skeleton can be found holding the Seedy Guard's Note, which reveals that the cargo had been handed over to the Indoril caravan and that its captain was planning to stop by the Hall of the Dead in Whiterun. Be sure to loot the nearby Old Caravan Chest for valuables, then make your way to Whiterun.

You will need to enter the Whiterun Catacombs once you arrive at the Hall of the Dead. This area is infested will low level undead skeletons. Down the first set of stairs, you will find the Caravan Captain's Note atop a low-lying table. According to the note, the surviving caravans took a detour towards Falkreath to avoid any further Dwemer attacks. You will find their remains at a ruined campsite in the woods northwest of Peak's Shade Tower. One of the skeletons is in fact the body of Velyne, a member of the Hlaalu caravan and seemingly one of the masterminds behind this venture. Velyne's Letter at last reveals that the secretive cargo is actually Sunder and Wraithguard, and that the Dwemer automaton attacks are the result of a fail-safe system implemented by Kagrenac to prevent his Tools from ever leaving Morrowind. The Dwemer created a Tamriel-wide network of drones which would track down and retrieve the Tools if they were taken out of Morrowind, and would then deposit them in a vault until a Tonal Architect could come and retrieve them. Seeking to put a stop to the attacks, some of the caravan captains betrayed their employers and handed Sunder and Wraithguard over to the drones. Velyne learned of this, and managed to track the items to a vault located in Sightless Pit. She obtained a Attunement Crystal to unseal this vault, but evidently died before an expedition could ever be organised. Take the crystal from her skeleton and be sure to loot the Old Caravan Chest before you leave. 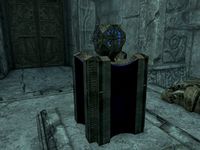 Use the Attunement Crystal to unlock the Sightless Vault 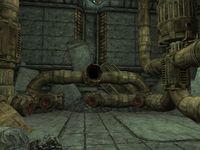 Steam will need to be restored to both valve systems 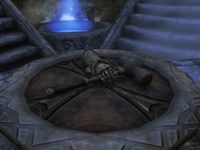 Sightless Pit is a Falmer-infested dungeon in the snowy wastes southwest of Winterhold. Unlike most dungeons in the game, the entrance to Sightless Pit is one-way, meaning you will need to fight your way through the entire complex in order to escape. See the dungeon walkthrough for more information. Your goal is to reach the final zone, Abandoned Cave. A new door has been added by this Creation, to the right of the lift as you enter the zone. Place the Attunement Crystal on the Dwarven Pedestal to unseal the entrance to the Sightless Vault. This is a new area added by the Creation and consists of a large central room with two side areas. Sunder and Wraithguard are locked behind gates in the center of the room and cannot be reached.