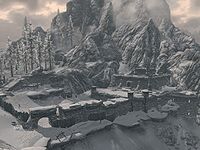 Fort Kastav is situated in a mountain pass which it spans almost completely, leaving only enough room for the road. The exterior of the fort is quite impressive, making use of the natural features of the mountain, and boasting many lookout platforms and an extensive ramp system. Skeletons patrol the walls, and another skeleton watches from a lookout post, while two powerful mages will emerge and attack if the skeletons raise the alarm. When approaching from the road, either use the main entrance into the grounds for a direct assault, or the platform ramps in the eastern corner for a more stealthy approach. Once inside the walls, find a small shed that contains an alchemy lab and a potion.

The prison section is on the ground level of the fort, and the Captain's Quarters are on the second level; each has a main door entry. The fort boasts a tower that forms a third level, which can be accessed via a ladder in the Captain's Quarters or by jumping up the nearby mountain slope. The prison can also be accessed via a trapdoor outside the fort, by a snowy ledge near the western wall.

If entering the prison through the main doors, you will begin on a staircase landing guarded by a skeleton. The landing extends onto wings to the right and left, but holds nothing of value. Down the stairs is the lobby and an illuminated area with a table, shelves, and an unlocked chest. The shelf holds a potion and a small coin purse. A Fort Kastav Prison key is on the table. Across from the table is another shelf holding assorted weaponry, and a leveled weapon is on the adjacent weapons rack.

The double wooden doors to the left of the table lead down to the main prison area, where a necromancer and a skeleton are waiting. The guard's area is on the upper level, and provides a view from above into each prisoners' cell below. There are five prisoner cells at the bottom of the stairs, and each is opened with the prison key. However, there is little of note in the cell area, aside from the style of the prison cells themselves, and a serving of dog meat in each. Rather, explore the guard's area. The shelf immediately to the left of the doors contains a potion and various alchemy ingredients. An unlocked chest is on the far side of the room on the south wall. A second fort prison key can be found on the table, or on the floor after becoming displaced by the necromancer.

Back in the lobby, the open storage room on the west wall features a weapon on a weapon plaque mounted to the right of a door. The door leads to a ladder back up to the exterior of the fort. Exiting here will place you just outside the fort to the southwest, overlooking the main road. There is no access to the Captain's Quarters from the prison.

From the main doors into the Captain's Quarters, you will see a table with a bottle each of wine and Alto wine, and a shelf with a selection of goat and eidar cheeses. The ruined storage area at the bottom of the stairs holds an unlocked chest, but little else of note. To the left of the main doors is a raised area serving as the captain's bedroom. Here you will find a small table with a scroll of Conjure Frost Atronach and an apothecary's satchel. An unlocked chest is at the foot of the bed, and an end table holds a copy of the Block skill book Warrior. A ladder next to the bed leads up and out to the fort's tower. A sacrificial altar is on the tower, and holds a dagger, a scroll of Conjure Familiar, a sample each of fire salts and void salts, and a bowl containing some loose gold, a Pine Thrush egg, and a nightshade flower.