Traps are environmental hazards which can cause damage, hinder movement, or otherwise get in your way.

Bottomless Pits are deep holes or chasms in the ground that the player can fall into and die. Examples involve falling off of the side of the world at the Tower's Summit in Aetherian Archive, falling into The Chasm in Coldharbour, and roll-dodging off the side of the arena whole fighting the Ilambris Twins.

Flamethrower traps are triggered by stepping on a pressure plate and activating the gouts of flames waiting in the walls.

Flame Spouts are timed hazards that will spew fire for a few seconds and then stop for that amount of time. They run continuously. They can be found in Pinepeak Cavern.

Flame Walls are timed hazards that will spew fire for a few seconds and then stop for that amount of time. They run continuously. They can be found in Hozzin's Folly

Hist Ponds are pools full of Blistering Amber located throughout the Ruins of Mazzatun. Standing in it applies a painful DoT.

Two nodes are set on either side of a hallway. Occasionally, an electric current is activated, connecting the two nodes. It looks like electric "trip wire". 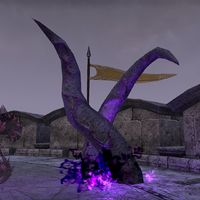 Nocturnal Creepers are shadowy tendrils that will snare and silence players they catch in their roots. They are summoned by Z'Maja in Cloudrest.

Poison Darts are found most commonly in Xanmeers. Triggered by stepping on a pressure plate, these traps will barrage the player with a ticking poison Damage over Time, and can hit repeatedly.

Poison Gas is a deadly hazard. It can be found in Stage 7 of Maelstrom Arena, and most notably, spewed by Gas Blossoms in the wilds of Murkmire.

Poisonous Spores are exploding fungal spores found in Fang Lair. They pop up around the dungeon and act as a mechanic during the fight against the Cadaverous Menagerie. They set a stacking DoT on players that hurts more if more spores explode on the same player. 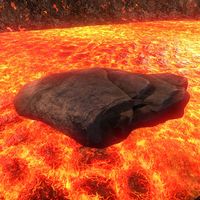 Rocks fall from the ceiling in Bloodroot Forge after the occasional tremor rattles the earth. They are used to traverse lava, as they can be jumped on to prevent the molten substance from melting anyone unfortunate enough to step in it. They can also fall on top of you if you're not careful, and even if you are.

Rock is crucial for two primary mechanics in Bloodroot Forge. One mechanic involves the Lava Shalks that litter the dungeon. When a player is targeted by shalk lava, they must find a pool of lava where a Rock is sat upon and jump onto that rock. The shalk lava will dissipate in the larger lava pool, and the player will be safe on their Rock.

The second mechanic involves the Minotaur boss, Galchobhar. When Galchobhar throws his weapon, players must leap to their own solitary rock to escape his fiery wrath. If a player does not pick a Rock to stand on, they risk being burned to a crisp. If a player stands on the same rock as another player, that rock will disintegrate into the lava much quicker. It is paramount for each player to stand on their own Rock in order to survive.

Spike Traps are timed hazards that cause spikes to protrude from the ground for a few seconds, and then stop for that amount of time. They run continuously. They can be found in Pinepeak Cavern.

Spinning Blades are present in the Clockwork City, in such locations as Halls of Fabrication.

Steam Vents are found primarily in Dwarven ruins such as The Scraps.

Trip Wire is a hazard that is a catalyst for other traps. Generally, a greater threat will reveal itself, or in the case of the Thieves Guild dlc, you may be tripped or Revealed.

This Elder Scrolls Online-related article is a stub. You can help by expanding it.
Retrieved from "https://en.uesp.net/w/index.php?title=Online:Traps&oldid=2199635"
Last edited on 22 August 2020, at 01:42