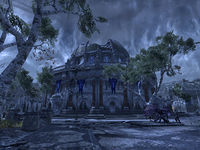 The Temple District is the southwestern district of the Imperial City. Mazaluhad and Immolator Charr are this district's Patrolling Horrors. The district's focal point is the Temple of the One, the epicenter of the Soulburst. The district's main road winds around the temple in a circle, and splits off in the four cardinal directions. The district's Capture Point sits above a canal along the district's northern wall. Foul fishing holes can be found in the water here. The district's skyshard is located in the western side of the canal, among a pile of rubble. Imperial Citizens are being taken captive by the Daedra throughout the district. The Sewer Entrance is located near the center of the southern wall. If you take the southern road from the Temple of the One and turn west at the bend, you'll find it. A nearby Grievous Twilight is tormenting an Imperial Citizen by chasing them back and forth across the lawn.

The Ebonheart Pact Base is located on the second floor of a building located just southeast of the district's Capture Point. The Shrine of Julianos is located in a ruined building just east of the base, between the base and the district's eastern wall. A Priest of Julianos can be found here during the related quest. An Imperial Citizen is being held captive by two Dremora between the two buildings. A small door leading to the Arboretum is near the shrine. If you head down the road leading southeast, you'll find another small door to the Arboretum along the southeastern portion of the wall separating the districts. A large door leading to the district is in the center of the wall, easily accessible by taking the main eastern road.

The Shrine of Mara is located by the northwestern wall, west of the district's Capture Point. A Priest of Mara is held captive here during the related quest. A chest can spawn in the narrow alleyway between this building and the larger one east of it.

The Monstrous Tooth Trophy Vault is located south of the southeasternmost building. The Temple Rectory is located east of the trophy vault. The building across from the trophy vault has two stories, and appears to have been a gathering place of sorts. The southern wing of the building is closest to the vault. There are five bookshelves on the second floor, and banners depicting Akatosh and Kynareth decorate the halls. The northwestern corner of the building on the first floor contains furniture that makes up part of what may have been a kitchen before the Daedra invaded.

A larger complex lies north of this building, and can be entered from the western end of the southern structure. When you enter the building, you'll notice the wall to the right of the door has been mostly destroyed. This part of the building (the western wing) contains a dining hall with a bar, which lies at the base of a staircase. A chest can spawn behind the bar, beside a basket of apples. Three Imperial Citizens are bound on the lawn south of this section of the building, by the district's southern wall. Two Dremora watch over them, and a Grievous Twilight walks between the captives and the trophy vault.

If you head north (and east) through the empty halls, you'll see a desecrated statue with a Daedric bowl set atop it. Another staircase lies at the eastern end of the hall, beyond another broken wall. There's a container of sacred oils here, next to an Imperial Citizen who's been cornered by two Dremora. If you head up the stairs, you'll see that several cages have been set up on the decrepit second floor. If you head out the building's westernmost door, you'll find yourself on the southeastern side of the main road. A canister of sacred oil sits between the fence and the house to the right of this door. Three Dremora and a Grievous Twilight shepherd Imperial Citizens into the temple out on the street.

The Temple of the One is the district's main event. The Daedra are herding Imperial Citizens through its hallowed doors, leading them to slaughter. A Xivkyn named Xotos Vel interrogates a Priest of Akatosh within the Temple, using his flock as leverage against him. Two Dremora Caitiffs lead hostages over for Xotos Vel to slay. A chest can spawn inside the temple, by the door on the western side. Once Xotos Vel and her minions are defeated, a Daedric Titan named Uzuruz descends from the skies. When you defeat him, a chest filled with loot appears beside the torture rack by the Temple's northern wall.

Each Alliance has a rally point inside one of the district's ruined buildings which can be accessed from their Alliance Base in the Imperial Sewers. The rally points are protected areas which members of enemy alliances cannot access, although if approached from particular angles, enemy players may be able to attack players leaving the rally point with ranged weapons and spells. There is a Sanctuary area in the interior of the rally point which nullifies all damage while a player is standing in it.

The Temple District capture point is located on the bridge to the inaccessible Imperial Palace, in the north of the district.

The Temple Sewer Entrance is on the southern side of the district, along the outer wall. It provides access to the Irrigation Tunnels section of the Imperial Sewers. 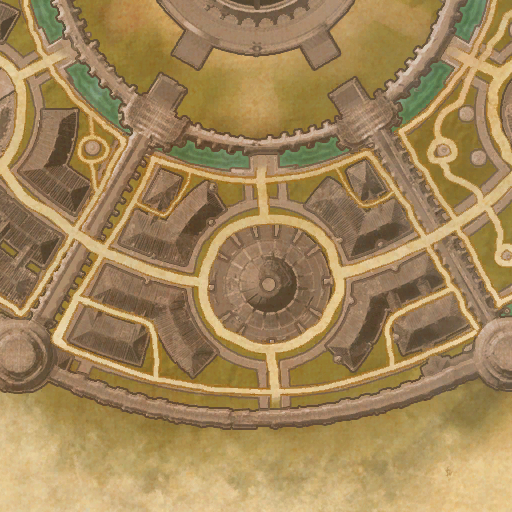 A map of the Temple District

This Elder Scrolls Online-related article is a stub. You can help by expanding it.
Retrieved from "https://en.uesp.net/w/index.php?title=Online:Temple_District&oldid=2325550"
Last edited on 8 January 2021, at 02:33