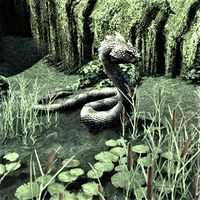 During Bosmer Insight, if you choose the way of the snake, towards the end of the trail to become a member of the Brackenleaf's Briars, a companion creature in the form of the snake will accompany you in completing the trail. 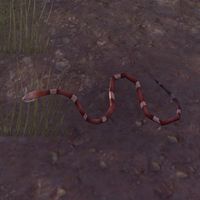 Some Giant Snake enemies in Craglorn are simply called "Snakes", and are slightly smaller than usual.

A snake summoned by Syvarra

These Snakes are summoned by Syvarra of the Deep during battle.

Snakes can be found at Zalgaz's Den.

This Elder Scrolls Online-related article is a stub. You can help by expanding it.
Retrieved from "https://en.uesp.net/w/index.php?title=Online:Snake&oldid=2289615"
Last edited on 26 December 2020, at 21:42