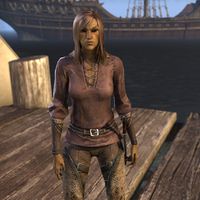 Captain Erronfaire is an Altmer ship captain located in Vulkhel Guard who has recently lost track of her crew.

Erronfaire can be found on the Vulkhel Guard docks, looking rather forlorn on a pier: "Tower, Steed, and Thief! Where are they?" Talking to her, she won't immediately share what troubles her:

"What do you want? Wait, nevermind. I don't want to know. I'm not taking on any fares today."
Something wrong, captain?
"You're damned right there's something wrong! I needed to sail for Velyn Harbor hours ago. I've got cargo still to load, and crew members deep in their cups around town.
I'd let the guard have the lot of them, if I could afford it."
I could round them up for you.
"There's coin in it for you if you do! Let's see. Tanamo favors the tavern. Anala spars at the Fighters Guild, and Balithil was visiting the market.
Don't know where Degail's gotten to. One of the others may know where she is."
Sounds good. I'll find your crew for you.

If you talk to her after agreeing to help she will grouse:

Once you have gone through the laborious process of locating all her crew, she will expect a report:

"Well. At least Tanamo is back. Good, reliable Tanamo.
Where are the rest of them?"
Um, about the rest of the crew ….
"Oh, this should be good. What?"
Balthil [sic] says he'll never go to sea again. Sea sickness.
"Sea sickness? The biggest swells we hit wouldn't have made my old mother queasy. And half the trip he spent in the cabins, swilling that awful meat brew Bosmer love.
Stars above! What about Anala?"
Anala's too afraid of the Maormer to go to sea again anytime soon.
"Maormer? What kind of phantom fear is that? I expected better of Anala. The Maormer are no threat to Vulkhel Guard."
Actually, the Maormer are moving on Auridon. Degail was captured walking on the shore.
"Well. Auri-El strike me blind. I'd best be getting out of here, then. If we don't move quickly, they'll lock down the port."
Your crew's all accounted for, then?
"Yes, yes. That's all of them. Now, let's see. If I toss Tanamo into a cabin and set sail today, I should just make Velyn ahead of the news.
Good luck, drylegs."

After the quest is completed, her only dialogue will be complaints about her current circumstance: "Damn the Maormer! And unreliable crews, on every dock in Tamriel."