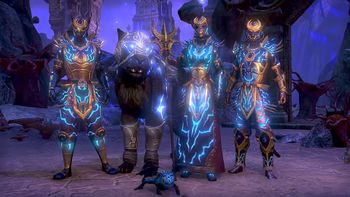 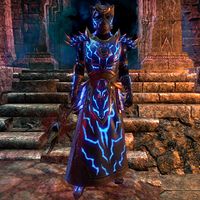 The dro-m'Athra are former Khajiit whose spirits were corrupted by the Bent Dance, the drumming of the Dark Heart of Lorkhaj. They serve Namiira, the Great Darkness, and reside within the Dark Behind the World. It is considered bad for the humors to even think about the dro-m'Athra for too long, lest these dark spirits have a foothold from which to corrupt an individual. The Twilight Cantors usually arrive in their wake to drive them back. They are similar to shades. For more information, see the Lore Page.

There is a skin and a crafting style based off of them.