Hundreds of Khajiiti undead emerge from the ruins of the Ashen Scar. A mysterious High Elf mage named Vastarie is trying to keep the corpses at bay, but without my help, the waves of undead might overwhelm Elsweyr. 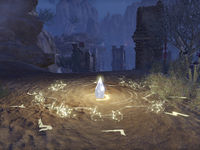 You will find Vastarie on the edge of the Ashen Scar. She is a necromancer and a priestess of Azura, and she's here because she has detected immense necromantic energy emanating from this region. Khajiiti remains are rising by the bucketful, and if they're not stopped, they could spill out from Elsweyr into the lands beyond. She asks you for your help in investigating the matter.

As you begin your trek into the scar, Vastarie stops. She hears a strange sound. Vastaries tells you to wait a moment.

"Forgive me. I didn't expect to face such resistance."
Are you all right?
"Yes. And no.
It felt as though I was struck blind and deaf, save for the sound of a beating heart. I think something tried to drive me back, then relented and tried to claim me instead. There's an intention to it. A greed and a hunger."
What should we do?
"You seem unaffected. Good. I can't go any farther. Not until I understand the nature of this event.
Take these descrying stones and place them throughout the canyon. They'll allow me to perceive this threat from a distance."
All right, I'll place these descrying stones.
"The three stones act in concert, so be sure to place them in a broad pattern that encompasses the whole area.
Now, you should set out. The sooner you place the descrying stones, the sooner I can locate the source of this evil."

Some sort of presence tried to drive her back, gave up on doing so, then tried to claim her for its own. A greedy, hungry force. She notes that you seem unaffected by the presence, and since she can't go any farther, she asks you to take a Bundle of Descrying Stones and place them throughout the canyon. These will allow her to observe what's happening to the corpses in the canyon from a distance. They act together, so place them in a broad pattern so they encompass the whole area. 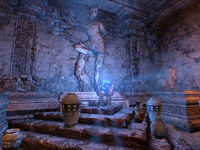 The first stone can be place close to the nothern ridge, on the way down. The next can be placed at the bottom of the canyon, near the center. The third descrying stone should go on the southern ridge. Vastarie will observe her surroundings through the stones as you place them. As the third ward is placed, she notices failing wards, as if someone tried to prevent what's happening today. She notices a concentration of dark energy in the excavated tomb in the center of the Scar. Meet her within.

Inside the tomb is a corpse, a journal and a dark orb. Vastarie urges you to destroy the orb. Once you destroy it, a specter named Arum-Khal appears and threatens the two of you before vanishing. Speak with Vastaries about what just happened.

"Thank you for acting quickly, friend. The situation appears much worse than I thought.
The being you just encountered—it was the shade of a dark lich. An undead Khajiit possessing unimaginable power. You just shattered one of his phylacteries."
Phylactery?
"A focus—like an arcane vessel or container.
Think of the stones I gave you earlier. Those contain a sliver of my essence, but nothing of what makes me who I am. Phylacteries contain much larger fragments of the soul. Powerful, but dangerous tools."
But I destroyed it.
"You destroyed one, yes, and the shade simply taunted us. There must be others.
If we're to have any hope of stopping this lich, we'll have to find and destroy all of them. A daunting prospect. They're probably well-hidden." 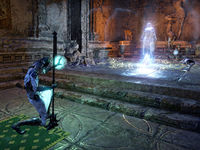 Vastarie notes the presence of the Khajiiti corpse on the ground, and that he is recently deceased. She advises raising him briefly to commune with his soul. He might have seen something before he passed. She performs a brief ritual, and Malizaz awakens. When he comes to, he demands to speak with you.

"We do not have much time. This one feels his spirit slipping away.
The dark lich, Arum-Khal, has awakened. He rises like foul smoke from beneath the Ashen Scar."
Slow down. Arum-Khal? Who is that?
"Arum-Khal the ancient defiler! The Dark Adept. Destroyer of the Hidden Moon!
If he regains his full power, death and horror will scour all the sands of Elsweyr!"
How do you know this?
"The orb. I tried to claim it for myself. It sent me to a realm of nightmares where Arum-Khal's spirit reigns as king. He tore my soul to pieces, then used the remnants to awaken his body, and everything else in this cursed place.
He … argh!"
Where is Arum-Khal now? I need to know more.

Malizaz is in great distress, and pleads with Vastarie to let him go. She does so, as she does not wish to force him to linger longer than he would like. Speak with Vastarie about Malizaz's revelations, and she will reward you for your assistance.