Mazza-Mirri, the last surviving member of the Hidden Moon Order, led me to an enchanted Moonlight Blade. The soul of an ancient Khajiiti warrior resides within. With this enchanted blade, and Vastarie's help, I may be able to stop Arum-Khal. 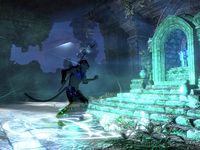 You'll need to kill 22 undead abominations to charge the Moonlight Blade's enchantment. Head into the Weeping Scar and start killing skeletons. Once you've charged the blade, head east, climb the hill and make a left turn. Keep walking along that ledge, which overlooks the Ashen Scar. A massive door depicting Azurah is here, and Shando-ri is looking up at it. Speak with him. Shando-ri explains that you need to shatter Arum-Khal's phylacteries and defeat the orbs' protectors: Arum-Khal's Shades. The Shades will attempt to flee, but Shando-ri will cross the breach and do away with them. He informs you that the power of the Moonlight Blade will be enough to deactivate the wards protecting the crypts in front of you. Hold the Moonlight Blade up, dissolve the wards, and enter the crypts. 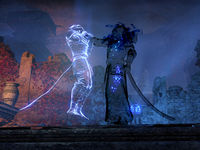 "You always did underestimate me, Shando."

To begin, you'll need to defeat Arum-Khal's Shades, which lie in the eastern and western chambers. The eastern and western hallways connected to the entrance are both straight shots in their respective directions. Head north in whichever hallway you choose, then turn east or west and enter the chamber. The shade to the west is a shadow mage, and the shade to the east is a shade sentinel. Both are magic users. Stay out of their snares and AoEs, and you'll be fine. After each Shade is defeated, Shando-ri will vanquish them. Once both Shades are down, head for the northernmost chamber, The Dark Adept's Crypt. There, you must face off against Arum-Khal.

Arum-Khal wields shadow magic. Take your time, heal as needed, avoid his AoEs and break free when he picks you up. Once Arum-Khal dies, he attempts to escape through his phylactery again. Use the Moonlight Blade on it to open a portal to his realm, then pursue him. Speak to Shando-ri once you enter Arum-Khal's Realm. He tells you that you must be the one to strike Arum-Khal down. Shando-ri is too weak to wield the Moonlight Blade. He bids you good luck. 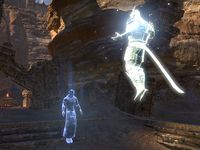 Head up the path to face the Dark Spirit of Arum-Khal. Here, he has the same abilities he did in the crypts, along with a single new spell. When the spirit's health hits a certain point, he will disappear and a ring of shadowy spirits called Darkness will surround you. As you fight them off, you will eventually be able to use the Moonlight Blade, on them which will automatically kill the remaining Darkness. Stay out of his AoEs and focus on one shadow at a time to pick them off quickly, allowing you to use the Moonlight Blade sooner. Try not to get overwhelmed. Once Arum-Khal is defeated again, the realm will start to collapse. Vastarie opens a portal back to Nirn for you, but you have the option of speaking with Shando-ri before leaving.

Head through the portal and speak with Vastarie. She was unable to remove Shando-ri from the realm, but you've successfully sundered Arum-Khal's spirit. She says she can try to reach Shando-ri, but it could be dangerous. She conjures a summoning circle and instructs you to hold the Moonlight Blade up in the center of the circle. Do so, and Shando-ri's soul will appear. Arum-Khal's redeemed spirit will follow, and the two will walk into the afterlife together. Speak with Vastarie to be rewarded for your efforts.